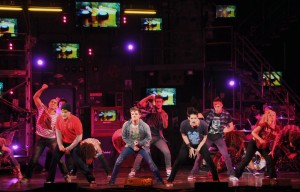 “Don’t wanna be an American idiot!”

I can commiserate. Since seeing the concert-like show—playing a brief and generally enjoyable touring engagement at the Cadillac Palace Theatre—on Broadway in 2010, I’ve maintained some major qualms with the musical that takes its songs and name from the popular Green Day album. There’s a perceivable condescension in how the creators, Green Day frontman Billie Joe Armstrong and director Michael Mayer, resolutely concede to society’s image of those smelly, eye-lining, spiky-haired punk kids, lending their characters not enough common sense to weigh the consequences of major decisions and reducing their personas to ideas and feelings: upset, wanton, life-of-the-party, responsible, etc. Coming-of-age tales are classic stories and fill a necessary theatrical niche, but please, if you’re going to put one on the stage, flesh out your life-and-thrill-seekers. Build them into creatures that supersede obviousness and obliviousness. They don’t really want to be American idiots, right?

Parallels are often found between “American Idiot” and “Hair” because both depend on the rebel rock music of their day strung together by sparse dialogue; “Hair”‘s spoken words are far stronger. And, scenically, “American Idiot” and “Hair” are both played out in suggestive warehouse-looking spaces. My discontent with this show is actually rooted in these comparisons. It’s easy to observe those lanky long-locked flower children bopping up and down to “Aquarius,” and think of them as society’s complacent fringe counter-culture, but they are, in fact, politically active. Most rambunctiously, they burn their draft cards and encourage bushy-tailed newcomers like Claude to do the same. “Hair” was controversial in its time, and some young folks got reprimanded for playing the record in earshot of mom; This weekend, mom will drag her son to “American Idiot.”

The musical begins with a now infamous quote from President George W. Bush, “Either you are with us or you are with the terrorists,” before raising the curtain to reveal an imposing wall of television screens (I counted thirty-six) playing a gag-reel of twenty-four-hour news cycle, commercials and “Family Guy” clips: “the subliminal mind-fuck America.”

The story that the creators have concocted, following the barebones plot of the original album, sees three college-aged guys go on separate journeys of terrain and emotional context, none of which ring true. Johnny (Northwestern senior Alex Nee, giving a far more honest and likable performance than John Gallagher Jr. did on Broadway), the Jesus of Suburbia, heads off to an anonymous city for a few months, riding a wave of needle drugs and powder-keg romance, all the while writing an epistolary novel’s worth of postcards. Will (Casey O’Farrell) joins the military after watching a glamorous commercial featuring a superhero soldier surrounded by women, and Tunny (Thomas Hettrick) never goes very far after his girlfriend discovers she is pregnant. Green Day’s music is performed in the same sequence as it appears on the album, and the stage show justifies why the tunes endure. The sound and melodies are high-octane, and it is among the best jukebox—if you can call it that—scores out there.

The musical’s storyline, loose but still too literal, repositions the album’s characters (Jesus of Suburbia, St. Jimmy, Whatsername,) as selfish victims of popular culture and media overload. Unlike “Hair”‘s tribe, these fellas allow the world to make their decisions for them, whining all the way. Joining up with the armed forces, for example, is an honorable pursuit, but not for the dramatic reasoning Armstrong and Mayer have given Will. He sings “Are We The Waiting” after the sexy army commercial to reinforce his search for purpose, but the song is too little too late. The whole musical is shamelessly manipulative.

It’s easier to digest “American Idiot,” I’ve found, if you appreciate the characters as a subset of early-2000s youth culture rather than an umbrella statement. And this fine touring cast, Non-Equity and removed of Broadway’s oft-conveyor-belt sheen, improves upon the book’s moronic narrations (“Last night I jerked off into oblivion, and today I forgot to shower…again”) with subtlety and a thankful injection of truth. On Broadway, the cast adopted a false affectation of angst. Although, in defense of that company of young actors, much of the affectation is built into the script and score, as both attempt to mimic the casually ambivalent nasality of Armstrong’s tenor. But this touring cast struck me with their genuineness and generosity.

So, if you disregard the album’s blatant political undertones that empowered youth in their time, just as this show has tossed them carelessly aside, and accept “American Idiot” as an exhilarating concert of nostalgic music, it’s a challenge not to feel an adrenaline rush or be charmed by the actors’ volcanic exertion. Perhaps the most wonderful piece of “American Idiot,” though is Steven Hoggett’s militant, evocative, gnashing movement and choreography. Chicago audiences will know Hoggett from the National Theatre of Scotland’s “Black Watch,” and, soon, from the Broadway tour of “Once.” In January, I took in the American Repertory Theater’s production of “The Glass Menagerie” that he provided movement for and it mindbogglingly illuminated Williams’ psychology with the utmost innovation and panache. He repeats such effect just as ingeniously in “American Idiot.” Hoggett is quickly becoming one of the most thrilling, satiating artistic forces of the international stage. (Johnny Oleksinski)