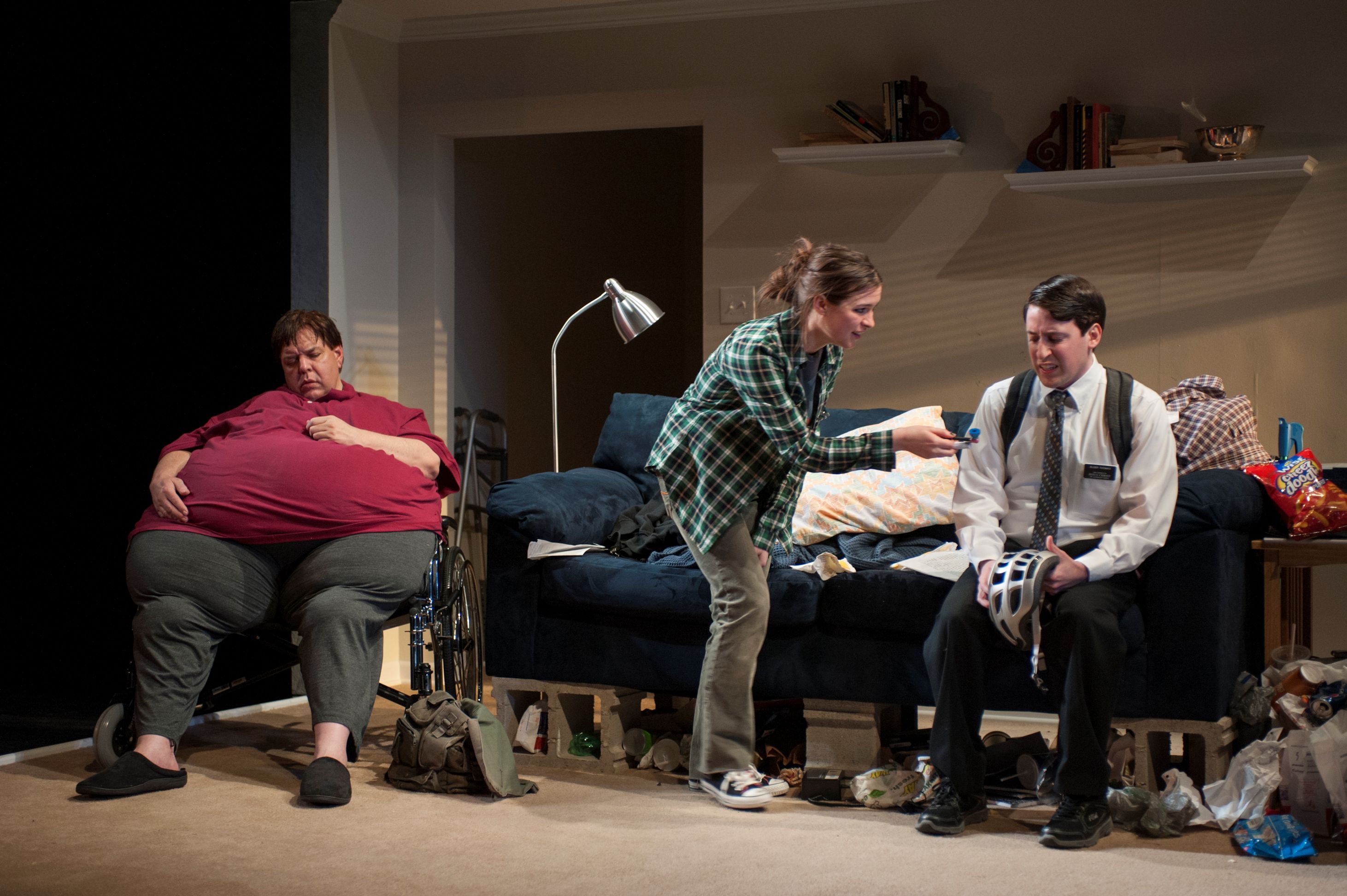 Seated behind me on Monday night at Victory Gardens Theater was a woman laughing uncontrollably while a six-hundred-pound man choked on a sandwich. My jaw dropped to the floor. The quality of her laughter wasn’t shock—you know, when visual stimuli so jarring forces you to cope by making some noise—but rather a one-person cacophony of self-satisfied giggles. So in rapture was she that I could hear her hand muffling her mouth in back of my seat.

There was no legitimate cause for laughter, mind you. Dale Calandra’s performance as Charlie in “The Whale” is among the most revelatory turns onstage this season: addictive in its complexity, simultaneously universal and of a singular time and place, enigmatic and all-around personable, kindly. Calandra, fitted with a body-suit, owns his character’s frame honestly and sympathetically; the majority of the audience embarked on a mutual journey with this man. This lady was guffawing at the image of a fat character choking. That’s it. However, as troubling a response as her’s was, the performer-and-audience interaction in that moment was astonishingly vital. We often rhetorically ask ourselves, “Why am I watching this play right now?” That night, for me, she was why.


Victory Gardens Ensemble playwright Samuel D. Hunter’s play is not solely about a person’s obesity, but rather the various reactions we have, so often consequential, to shame and guilt. Having just seen the playwright’s “A Permanent Image” by LiveWire Chicago Theatre the evening before, I noticed consistencies that worked much better here. In both plays, Hunter harnesses pressing social issues to engage an audience in his story, but he never advocates for a particular side or solution. Here the questions become: What are the causes and of shame and guilt? What exacerbates them? What in our lives is toxic? What do we as humans need? Charlie explains his weight gain as a reaction to the death of Alan, his partner, but homosexual shame in a heavily Mormon community (the play takes place in Northern Idaho) is implied here, illuminated gently by the incursion of a missionary, Elder Thomas (Will Allan, sweet while dark). 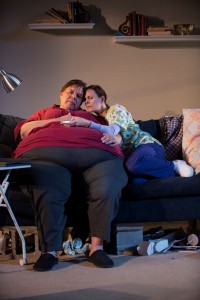 Charlie, the largest life-sized human character you will have ever seen onstage, lives out his days on a couch with forced contentment. Ever the optimist (there are cracks in his easygoing exterior, but he caulks them quickly), he is not lazy in the slightest. He works from his blue central perch as an online instructor of organized essay writing, and his only friend is a nurse named Liz (Cheryl Graeff), who he first met during happier days. She brings him fried chicken sometimes, or Subway, or Dr. Pepper, and will hesitantly hand the food to Charlie knowing that she’s enabling her dying friend.

Liz, played by Graeff with cold-weather middle-America snark, watches as he grips his chest in frightful moments that could either be extreme heartburn or imminent heart failure. They’re never sure because Charlie refuses to go to the hospital. His apartment is kept claustrophobic at Victory Gardens (set by Chelsea Warren), not extending to the sides of the proscenium arch or all the way upstage, a cage trapping this man and making his mobility both simpler and more complicated depending on the means. Of course, cages can protect just as well as trap.

Hunter’s dialogue, while sometimes stilted, builds sophisticated characters from deceptively flat demeanors. The audience first gets to know each person by a defining characteristic—Charlie is fat, Elder Thomas is a Mormon, Liz is bitchy, Ellie is hateful, Mary is an alcoholic—but when that initial perception is called into question by the subtlest behavioral shifts, the audience must completely reevaluate their opinion. And they do, constantly.

Ellie, Charlie’s daughter, behaves so cruelly that she even curates a “hate blog.” And, lest you chalk it up to her being a victim of an uncontrollable circumstance—estranged for more than a decade from her gay father and living with an alcoholic mom, Mary (Patricia Kane)—her mother recalls her as always having been this way. “When she was nine, ten, I thought—I’m not giving him the satisfaction. I’m not letting him see this awful little girl and blame it all on me.” Karpel adds an easy sting to Ellie’s vitriol spewing that makes her less detestable; it hurts her as much as it hurts him.

But Ellie’s most humanizing words come from an essay she wrote in the eighth grade on Melville’s “Moby Dick.” “And I felt saddest of all when I read the boring chapters that were only descriptions of whales, because I knew that the author was just trying to save us from his own sad story, just for a little while.” In this essay, the closest thing Charlie has to a religion, he perceives not only her intuitiveness but her inner compassion. It calms him, it elates him, it’s the most soulfully satisfying device in “The Whale.”

In a nation that seems to find a new volatile division each time we cross one creaky old bridge, Hunter’s play is a wake-up call for those who subsist on painting the world and its inhabitants as simple and easily defined. Like “The Whale”‘s titular metaphor—alluding to Melville’s “Moby Dick,” the biblical Jonah, the mammal in nature, the mammal in captivity, and more—human beings are vibrant, multifaceted individuals; their problems, multitudinous and many-sided; their potential, boundless. These ideas are all beautifully encapsulated in a fabulous theatrical creation named Charlie. (Johnny Oleksinski)