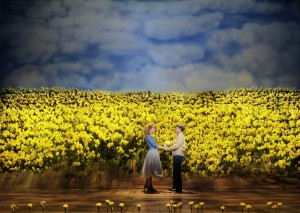 “Part epic tale/ Part fire sale/ But all sincere/ And standing here.” And all true, I might add, of the new musical “Big Fish,” which opened last night at the Oriental Theatre ahead of a Broadway bow in September. Playing Edward Bloom, a husband and father in old age about to die of cancer, Norbert Leo Butz sings the reflective phrase during the musical’s final number, a respectable solo aptly named “How it ends.” Well, in its nascent stage, “Big Fish,” despite some sporadic lucidity in its first act, ends this much better (my arms extend outward to indicate an impossible size) than it begins.

The final fifteen minutes, part fever-dream/part baptism, are undeniably moving; the propulsive coda of composer-lyricist Andrew Lippa’s musical glistens with reverie and contemplation of a life well lived. However, much of the second act and the whole of the first demonstrate why Daniel Wallace’s novel is mostly incompatible for a stage adaptation unless significant deviations (yes, even more significant than here) are made.

Wallace’s book and Tim Burton’s film allow for an imagination and spectacle that the messy and confused stage show simply cannot muster. Edward Bloom tells tall tales—impossibly farfetched adventures of fate, heroism and perhaps a pinch of egotism for good measure—but it’s of vital importance that the audience not view him as another yarn-spinning fabulist. The question of “Did this really happen, or did he make it up?” must be always on our mind. If we view his stories (his son Will calls them “lies” and we are inclined to agree) as fake, as the production seems to with its jokey affectations, why give them our full attention?

In the film, the story sequences were aesthetically dazzling, and the reality of the medium lent them a believability in spite of the wonderment. The stories now, not fanciful but cutesy, are visually pleasant but too reliant on projection after projection; They’re not at all well integrated into the central plot: that of a son attempting to reconcile with his dying father. And they all come across as blatantly fictional and creatively lackadaisical (apart from an impressive witches fabric dance and three stomping elephants). 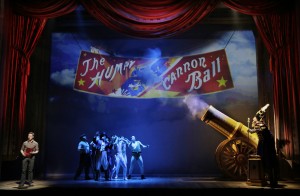 The tall tales subplot is a kind of “How I Met Your Mother,” segueing into a “Did I or Didn’t I Cheat On Your Mother?” Edward’s stories currently serve two necessary functions: most obviously, they establish him as tale-spinner; additionally, one story not told by Edward successfully mends his relationship with his son. Unfortunately, the remainder of John August’s (also the movie’s screenwriter) book skips over some helpful, guiding dramatic elements, and potentially gleeful stories, treating them as garnish rather than the main course.

We’re introduced to a young Will (a truthfully precocious Zachary Unger) who fully embraces his dad’s maybe-fibs, and we further follow the present-day Will who vehemently renounces them. The now-married son even describes their emotional divide in a song, “The River Between Us,” but we never experience the exact second—it must have been a fairly momentous falling out, as slight irritations do not a musical make—where young Will falls out of love with his father. In order to cure their ailment, it must first be diagnosed.

“Big Fish,” apart from its father-and-son central heartbeat, is all about storytelling’s relationship to truth. Where does fact begin and fiction end? The division is stark. One of Edward’s stories might whisk you away to a vast field of daffodils or a neon-hazed swamp inhabited by a sultry witch (Katie Thompson, too sultry, if you ask me), but reality is more grimy and fluorescent than that. Edward lays in bed, either in a hospital or his home of many years, dying of inoperable cancer. These upsetting realities are as immediate and petrifying as jumping head-first into an icy lake, but Lippa’s score keeps the proceedings consistent and milquetoast while Julian Crouch’s set puts the head-in-the-clouds escapism and the bleak present on an identical canvas.

Andrew Lippa’s score, as repetitively upbeat in sound as it is in subject, fails to unearth the thrill and danger of these tall tales. Edward never overcomes any difficulty, it seems. Truly, “Big Fish” is all much too safe right now, even in the song whose chorus sings, “There’s gonna be a hangin’ tonight!” It takes all of five minutes for a semi-fearsome giant (called a “giant,” but he’s got nothing on Yao Ming) named Carl to be dancing an unfathomably hokey watch-and-repeat routine with Edward. Stroman inserts many of these choreographic flourishes (one called “The Alabama Stomp” rescues a whole group of fishermen swallowed up by an enormous fresh-water catfish) into her production—A production unusually indecisive and cluttered for a director known for precision. 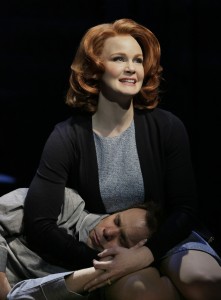 Kate Baldwin brings a deft versatility to Sandra Bloom, navigating through her poodle-skirt teenaged years to reverent old age with grace and even a certain edge. But Baldwin’s impactful voice, blending sheer force with world-weary wisdom, needs more to sing. The best number in the show, “I Don’t Need A Roof,” belongs to her, and the second brightest is her love-at-first-sight duet with Butz, “Time Stops.” That’s not nearly enough of a showcase for an actress so gifted and affecting. Baldwin’s portrayal is the only force keeping Sandra and Edward’s relationship grounded. Butz’ performance is based in gags and presentation, sensible for Edward, but it doesn’t endear you to the guy. Dare I say, it’s somewhat pesky? Bobby Steggert’s Will is vibrant in its subtlety. A big musical on an even bigger stage is the perfect chance to puff out your chest and apply your wackiest grin, but he plays his scenes as though he’s onstage at the Goodman or Steppenwolf. Now, if only August would give him more decent scenes and a clearer through-line.

For all its many shortcomings, what rumbles steadily at the core of “Big Fish,” sometimes too quietly to perceive, is its soul and underlying maturity. While a deluge of new musicals about the need for wishy-washy heartwarming acceptance are traipsing the boards, this show, despite its flimsy book and flat-lining score, is remarking on the difficulties of intimately accepting a person into your life along with all of their flaws, pet peeves and quirks—the ante is upped by that person here being a parent. There is tried-and-true adult drama in that scenario, and it’s reason enough for the creators to continue to cut, tweak, tighten and rework what they have. Like Edward’s final story, “Big Fish”‘s final product is still very much to-be-determined. (Johnny Oleksinski)