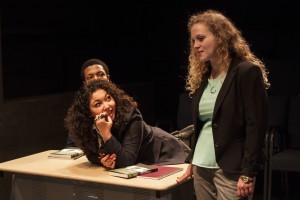 In a classic sketch from the inexhaustible British comic duo French & Saunders, the comediennes dressed as English schoolgirls pester an invisible teacher from the back of the classroom. “Miss,” says Jennifer Saunders in an empty-eyed, dry whine, “You gonna be a real teacher, please?” Dawn French joins in, “Yeah, ’cause you’re just a student, aren’t you Miss?”

Somewhere near the middle of playwright John Donnelly’s “The Knowledge,” a Chicago premiere at Steep Theatre positing that underprivileged environments amount to crass sexual vulgarity among students that enlivens the same dormant behaviors in their impressionable teachers, I got to wondering, Why does Britain hate school so much? From the parlors of high society all the way down to London’s East End, grammar school is portrayed as a hotbed teeming with forces destructive not only to learning, but living. That’s what a play does, right? Heighten the daily doldrums. But British plays, television and film really put their adolescents, portrayed as the most horrid little underlings conceivable, through the ringer.

The easiest avenue for discovering an unfamiliar school with its unique policies, routines and lingo is through a new student or, in the case of “The Knowledge,” a new teacher. Zoe (Caroline Neff) has only just earned her certificate and, like any teacher beginning work in an underprivileged community—that community here is the town of Tilbury in Essex: a manufacturing center in southwestern England—she dons a bulletproof resolve. Zoe thinks she can take any punches, verbal or otherwise, that these victimized rascals throw at her, but of course that’s not true. Whenever she isn’t yelling, she’s crying. What really sets her off are unplanned classroom chats about sex, as graphic and immature as one might expect of sexually active fifteen-year-olds. And her scummy male colleagues extend few olive branches.

A stigma Americans have to temporarily negate in order to appreciate this play is our culture’s attitude toward sex. You must accept that sixteen is the British age of consent, for unlike in Alan Bennett’s “The History Boys” wherein the sixteen-year-old boys’ age was ignored on Broadway to keep the play from becoming solely about a gay schoolmaster’s legally-but-still-uncouth interaction with his students, Steep (as it must) has explicitly kept the characters ages at fifteen. So many teacher-student scandals in the United States seem to involve a seventeen-year-old student and his thirtysomething teacher, but in “The Knowledge,” it’s a fifteen-year-old boy and a twentysomething professor.

Donnelly’s play—the title, an oral-sex innuendo that flies over Zoe’s head, ironic since these students have so little knowledge about intimacy or anything else—is a challenge to tolerate for very long. Jonathan Berry’s physically well-staged production and the text rely on an assumption that we understand the economic situation in Tilbury. That Donnelly set the play in an actual town means the name Tilbury conjures an immediate image in the head of British audiences. For us Stateside, without a clear picture of what exactly these kids are going home to, it’s exhausting to put up with their mean-spirited behavior. Also, perhaps I’m a touch prudish, but need a female character demonstrate applying a condom to a rubber phallus using her mouth during a sex-ed course?

Even in a play with the sensationalized discolorations of a Victorian serial, Caroline Neff turns in a well-rounded and human performance, typical of the easeful, expressive actress. With the machismo of the New Testament, Donnelly has Zoe falter every which way, but Neff defies the character’s frailty and picks herself right back up every time. The classroom of four (I still can’t quite grasp how she lucked out with such a small group) handle their vicious humor well, but only Daniel (Jerry Mackinnon Jr.) gets the benefit of a backstory.  (Johnny Oleksinski)