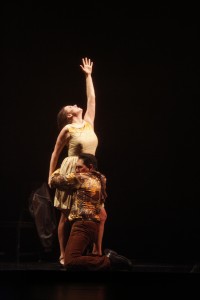 One of the problems with being the new impresario in town who conducts, directs and simultaneously runs another opera company on the West Coast is catching your breath long enough to attain some sense of what has happened here before you arrived. Andreas Mitisek said in spoken remarks at Saturday night’s Chicago Opera Theater opening of “María de Buenos Aires”—in a comic faux fundraising letter from its deceased composer Ástor Piazzolla, no less—that Chicago had waited forty-five years to hear the piece.

COT has tempered this claim somewhat by calling the Mitisek production, which premiered in January at the Long Beach Opera which Mitisek also runs, the Chicago stage premiere. But even that is inaccurate, as the City of Chicago presented the piece as its Summer Opera in 2011. Quite often, those have been concert performances, but in this case, the work was staged. (And violinist Gidon Kremer even brought the piece to Symphony Center in a semi-staged version back in 1998.)


Be that as it may, Mitisek’s production is so different from the traditional production presented nearly two years ago that even those who saw the piece then will have an entirely different experience this time around.

We tend to think of the tango as primarily an instrumental genre, and of its greatest exponent, Argentine composer and bandoneón virtuoso Ástor Piazzolla, as the master of the genre. In 1968, however, Piazzolla wrote an “tango operita” with Argentine poet Horacio Ferrer since, as Piazzolla remarked when they first met, “You are doing in your poetry what I am doing in my music.”

The end result, “María de Buenos Aires,” is a large-scale work that is to the tango what Johann Strauss II’s “Die Fledermaus” is to the waltz: not a mere pastiche of one sung dance after another, but a cohesive, if surreal, narrative told via tango, in this case incorporating various types of tango, including traditional, romance, song, modern, milonga and yes, even waltz, along with folk music from the Pampas.

While keeping the score, conducted by Mitisek, and the tableaux idea of the original, Mitisek has updated the action to Argentina’s “Dirty War” between 1976 and 1983 where the seductive tango music becomes, literally, a dance of death.

The opening violent video images from that period that are shown are disturbing, to say the least, made all the more eerie by the propulsion of the tango which accompanies them. The way that these images and the pantomime of live dancers emerge from darkness is artfully haunting.

The work, which is presented without intermission and clocks in at a compelling and compact seventy-five minutes, sees the tango not as romantic seduction, but as violent rape, in some cases, graphically depicted on stage. In the end, the production succeeds because it works, it engages us, despite its brutality and casts an undeniably hypnotic spell.

Mezzo-soprano Peabody Southwell gives María the swagger the role needs to be convincing, and yet is tranquil, virtually resolutely sacrificial throughout the violence that she must endure in tandem with the Luna Negra Dancers.

Kudos as well to the two narrators, Gregorio Luke and Gregorio Gonzalez, and to bandoneón player Peter Soave, who manages to constantly keep our interest, even when playing a single note quietly, but expressively. (Dennis Polkow)