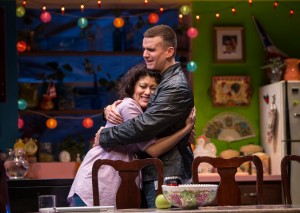 Warming up to the characters in Quiara Alegría Hudes’ new play “The Happiest Song Plays Last,” which opened tonight at the Goodman Theatre in association with Teatro Vista, requires some patience of the viewer. In considering the psychological and emotional extremity of characters Elliot and Yaz’s present lives, from filming a staged war documentary in Jordan to welcoming and feeding local homeless men in Philadelphia, you can’t help but feel there is something missing here. That is because, for many, there is—literally.

“The Happiest Song Plays Last” is the third and final portion of Hudes’ Elliot Trilogy, which follows the war-time duress and familial resilience of the Ortiz clan, and otherwise includes “Elliot, a Soldier’s Fugue” and 2012 Pulitzer Prize winner “Water By The Spoonful” (a part of Court Theatre’s 2013-14 season). This latest addition quite contently and peaceably exists as a bookend, relying on our previous knowledge of the two returning characters to understand what they’ve overcome and how this destination reflects on their expansive life experience.

For those unfamiliar with Hudes’ two other Elliot plays, you will come to understand and appreciate the people that inhabit her humid, floral, optimistic mind-scape (Elliot Ruiz, her cousin, is actually a non-fictional part of her life) midway through the first act, after the former soldier and his charitable activist cousin Yaz (Sandra Marquez) have their texting conversation. They Skype too. Contrary to critical gripes about the coldness or inactivity of onstage texting and phone calls, they’re Hudes’ most human moments—as beautiful as they were in “Water By The Spoonful” when Elliot’s mom Odessa moderated a chatroom for recovering addicts—due in part to the playwright’s injection of theatricality into the sequences, as though an epistolary work.

The first sounds heard in director Edward Torres’ production are music at a 2010 Arizona protest in front of the state capitol building. The strings of the cuatro blend with sung lyrics and shouts of “Sí se puede!” Hudes’ herself studied music at Yale before she became a playwright, and her ability to write dialogue alongside lush aural rivers (she wrote the book of “In The Heights”) hypnotizes as the spoken words and plucked strings (blissfully played by Nelson Gonzalez) accumulate meaning in tandem. We first see Agustin (Jaime Tirelli), an aging musician, and Yaz together at this protest, and their relationship becomes a major dramatic thread. As the fellow falls for the girl, about half his age, in set designer Collette Pollard’s actual-hole-in-the-wall kitchen, the progression of their relationship is confusingly staccato. And though their out-of-the-blue union results in something tactile and substantive, it breezes by like a storm in the night. 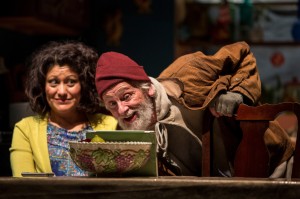 In “Elliot, a Soldier’s Fugue,” we learned of the first man that Elliot, a young Puerto Rican-American soldier, killed in the Iraq war at the age of nineteen. Once again played by Armando Riesco—a performance so lived-in and charismatic, you’ll want to hang out with Elliot post-show—now he is on a film set, playing the part of a soldier, as though he was always playing a role. The setting, too satirical, comes across as a device meant to bring closure to the pain he’s lugged around for so long, introducing him to a down-low Iraqi translator, Ali (Demetrios Troy), who escorts him and eventual girlfriend Shar (Fawzia Mirza) around Jordan and to the protests in Egypt’s Tahrir Square on the cusp of Arab Spring.

In a program note, Hudes fights against prevailing American ideology that nostalgia is “sentimental and simplistic,” and argues that for Puerto Ricans, it’s “a form of cultural survival.” The playwright is absolutely correct in this assertion, and the nostalgic ruminations are the high points of her work. When Elliot and Yaz discuss their past, laugh about old holiday parties or tease each other for their undergarment purchases, their kinship hits you where you live. But the sentiment of nostalgia often bleeds into and unnecessarily overwhelms whole other portions. The inclusion of Lefty, a Saint-Francis-faultless homeless gentleman who calls Yaz “Mom,” (with the best of intent from Hudes and actor James Harms) comes across stereotypical and manipulative in his cotton-candy kindness. The wedged-in caricature rambles in poetical nonsense that later proves not-so-nonsensical, in the grand tradition of Lear’s Fool, but he never quite achieves humanity.

The luminescence of Hudes’ play, picturesque and blinding in alternation, comes from her profound connection to these characters, these places, these richly textured people and this historically pregnant music. Her world hovers above reality as it invites us in and comforts us when we arrive. But while this ending third is, indeed, meant to be the happiest song, experienced self-contained, the lingering euphoria and even the final gesture of loss feel empty. (Johnny Oleksinski)