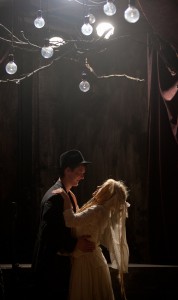 TUTA has transformed its Studio Theatre into a bohemian tent draped with patterned fabrics and littered with crates and seemingly discarded light fixtures. Is there any better landscape for a Serbian folktale? This adaptation of “The Silent Language” by Miodrag Stanisavljevic and translated by Zoran Paunovic was originally written in 1981, though the folktale’s origins are centuries old, and its amped-up mood is indicative of its time. Gasho, a young wool-cap-clad busker who wanders the forest only to become tangled by a talking snake princess, harkens back to eighties and nineties cartoon flicks like “A Troll In Central Park” or “The Princess and The Goblin,” which themselves harken back to Arthurian legend.

Director Jacqueline Stone is right to capitalize on a 1980s folk-tale ambiance because “The Silent Language,” with its witches, elves and chit-chatty animals fulfills and satisfies as children’s theater, rather than as an adult play. Stone directs with enough darkness not to frighten kids, but not enough to engross their keepers for more than a few parceled sections. Three of the play’s images are bewitchingly transfixing: the long-nosed boogie man (Sean Ewert) who looks as though a particularly messed up serial killer, a stone-faced band that plays what sounds like a depressing Polish drinking song, and a princess (a different princess, more frightened lamb than serpent) clutching a candle as she softly sings her desperation to the sky.

“The Silent Language” refers to the language of the animals, the trees, the grass, the wind and of all nature that humans cannot understand. There could be some muted environmentalism in that aforementioned misunderstanding; Perhaps, if we were to listen more closely to our furry and feathered friends, harmony might emerge from the symbiosis. After encountering the Snake Princess, Gasho escorts her home by way of slithery dance and the Queen of All Snakes reluctantly grants him the ability to communicate in the silent language.

Of the more kid-friendly aspects of this play, it’s the language (anything but silent) that falls flat. The animals dressed in clothing indicative of the beast’s natural personalities speak in “Roo!”s, “Tweet!”s,”Buzz!”s and “Croak!”s replacing the usual word, with phrases turning along the lines of, “Where are you croaking?” The animals’ dialogue never contributes the humor or sing-song whimsy it means to, getting trapped in a “Henny Penny” cliché. The ensemble is boisterous and speedy, switching between characters backstage in a manner that truly gives the illusion of a much larger cast. But the most in tune with the play’s European side—this is more faerie tale than fairy tale, where although there is a happy wedding ending, the path’s danger is given the most attention—is Carolyn Molloy as the snake and Princess. Molloy never plays nice, and for maybe the first time, I saw a Princess in a tower who needed rescuing immediately. (Johnny Oleksinski)