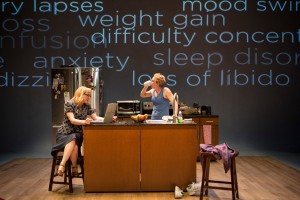 Lookingglass Theatre Company has a proven flair for effectively incorporating visual effect into scenarios and scripts that don’t outright scream for it. And after “Eastland,” “Metamorphoses” and “Bengal Tiger at The Baghdad Zoo,” plays that did scream for it, comes “Still Alice,” Christine Mary Dunford’s moving-though-stuffy adaptation of Lisa Genova’s novel about a woman struggling with early onset Alzheimer’s disease, once again affirming their finesse.

The first sign that something is off-kilter comes during one of Alice’s daily runs through Evanston where she lives and works as a professor at Northwestern University. Actress Eva Barr jogs in place above a projected street map on the floor, representing the unflinching quality of both her routine and the cemented city streets, when the projection starts to contort. The canvas spins, lines move and widen, letters disappear and Alice has no idea where she is—even only blocks from her house. From there, life will only get more trying as her world dissipates. Dunford’s production begins with a kitchen full of furniture and ends as little more than a hardwood floor.

It’s no small task to cover such a wide expanse of time onstage, let alone capture the heartbreaking deterioration a person with Alzheimer’s Disease endures in those years. I did my best to keep tabs on the amount of time passing, but I lost track when the previously specific background projections read “Some Time Later.” Perhaps an abandonment of time’s significance is just the point. But therein lies the rub. There are so many theatrical touches in Dunford’s adaptation that threaten to rob the piece of poignancy. Even making Alice a professor, though obviously Genova’s original choice, is manipulative. It is as if to say, “Look at all of this lost knowledge.” The production, design and actors succeed more so than Dunford’s script, which is forced to concentrate a novel’s breadth into fast-paced scenes that give a too-cold step-by-step depiction of the disease. The expediency with which the scenes move ratchets up the sorrow one feels for Alice and her family, but it also keeps us at arm’s length from empathy.

Another addendum that is too apparent a dramatic device is the character of Herself, played resiliently and with good humor by Mariann Mayberry. We are to understand, or presume, that Herself is a piece of Alice’s personality based on the first moment they both appear onstage together, dressed in the same nightgown. What the casually ambiguous character enables in the play are conversations (Mayberry and Barr have a genial, sisterly rapport) for Alice when no one else is around. She also allows us a glimpse into her frustrated mind. Alzheimer’s disease, I’m sure, can be a very lonely existence, and the sufferer is the only person who can understand their own suffering. So, in one respect it’s enlightening to divide the sufferer into two communicating characters. But in another respect, it’s misleading. Herself’s presence, at times, causes the audience to forget just how isolated Alice really is.

Although Barr and Mayberry have the lion’s share of the drama, Dunford’s adaptation gives us greater access into the unease of Alice’s family, particularly her two adult kids, Thomas (Cliff Chamberlain) and Lydia (Joanne Dubach). Lydia is a nineteen-year-old who opted against going to college to pursue her dreams of acting in Los Angeles, only she’s doing far more latte-brewing than performing. And Thomas, several years older than Lydia, is a working man with a wife at home. For anyone who has ever cared for a loved one who can no longer care for themselves, watching the two siblings argue over what serves their mother best is intensely relatable and woefully cathartic. This is the best work from Chamberlain of the past few seasons. He has a tough job as the more aggressive sibling, but he absolutely bleeds compassion as his logic and his love for mom collide. It’s also lovely to see Dubach, after her adorably peripheral turn in Mary-Arrchie’s “Glass Menagerie,” return to the stage in a more peppy, narcissistic role. (Johnny Oleksinski)