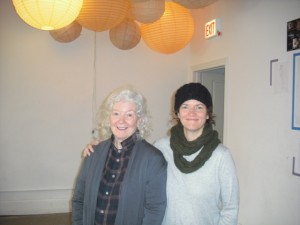 “Three generations,” points out director and actress Mary Ann Thebus. She’s sitting on a couch against the back wall of the Victory Gardens Biograph Theater lobby next to her daughter Jessica Thebus and Jessica’s young daughter Willa. Willa, still in the single digits, lounges across mom and grandma’s laps as we discuss their new project, one unprecedented for the duo. The Thebuses are co-directing Donald Margulies’ “Collected Stories” with American Blues Theater: their first production at American Blues and, more amazingly, their first-ever production as co-directors. Born into a theater family, Willa has a school play coming up as well, but we’ll save that for another interview.

For those familiar with Margulies’ play about a writer and teacher’s tug-of-war with her protégé, this mom-daughter arrangement will strike you as clever and appropriate, but the thematic parallels are happenstance. As are the predecessor-and-successor casting of former ABT artistic director Carmen Roman and current artistic director Gwendolyn Whiteside. “Well, it’s kind of complicated actually,” says Mary Ann. A longtime actress in Chicago, she teaches an advanced scene study class at the Artistic Home that she takes great pride in. You can tell Mary Ann is an experienced acting teacher because she has such an ease with explanation. “Carmen and Wendy, who are both part of American Blues, had decided on doing this piece, and Carmen primarily was interested in my directing it.” She unashamedly admits, “I’ve not directed a full show before.”

Coming from an acting background, Mary Ann knew there were parts of the directing process she couldn’t confidently control just yet. “[The play] was interesting to me, but I would not have taken it on if Jessica hadn’t agreed to go in with me on it because I don’t know anything about working with designers or how to do that whole piece of theater. I’m a total novice.” Jessica, though busy helming the Northwestern University MFA directing program while Anna D. Shapiro is on sabbatical, happily agreed, and they embarked on a rather uniquely well-defined arrangement—as though drawing a peaceful line across the center of a room.

Jessica expounds on their plan. “We determined that mom would focus on the acting, and I would focus on working with the designers. So, she could do what she does best, which is work with actors, and I could make sure that every other element of the production was easy and fun and elegant and beautiful and appropriate to the story that she wanted to tell.” The system has worked for them so far. Their first preview is tomorrow, and they inform me that only during the show’s technical rehearsals did their roles begin to merge somewhat. Jessica might comment on the performances and Mary Ann might make a note about the projection fades. That is all much easier now that she’s more familiar with the procedure, but the entire experience has been “quite a ride.”

“It’s very easy to work as colleagues. Much easier than as mother and daughter,” says Mary Ann. They both laugh. Jessica adds, “I think our division is very wise.” She knew the well-defined roles were essential to a congenial working environment. “I don’t think we have any disagreements about the play actually. Or about the performances. We’re pretty much totally on the same page.” She goes on to say that if they had been attached at the hip during every rehearsal, they might have been more argumentative. Mary Ann matter-of-factly says, “We’re both strong-minded.”

Even though the move wasn’t intentional, I’m curious how working together affects a play like “Collected Stories,” so tied to the idea of passing the torch and power. Mary Ann insists that all experience colors an artistic creation, but Jessica says that “there is a lot of, you know, my mom who I’ve learned so much from, and me who has a strong voice of my own now, and what that negotiation is.” But both agree that, at its core, “Collected Stories” is a play about intimacy and the potential danger of letting someone into your life. It’s those stakes and the risk of being unsafe that drew Mary Ann to this play in the first place.

Now that Mary Ann and Jessica have had their debut as a directing partnership, can we expect any more co-projects from them? Mary Ann isn’t so sure. She says that her relationship with Carmen, “was the entry into it, rather than my saying, ‘Now I’m gonna start a whole new branch of my career.’ It’s not that. It’s, I suspect, a one-time thing. Unless we’re in great demand as a pair, but I don’t anticipate that.”

“Collected Stories” opens on April 25 and runs through May 19 at the Victory Gardens Biograph Theater. For tickets, go to americanbluestheater.com.