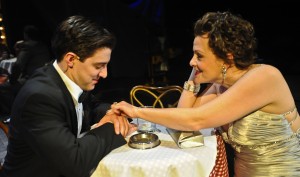 Singing-dancing mischief-maker Joey Evans is the ideal match for two-faced Chicago, its organized crime and morals-be-damned nightlife, or so says composer-lyricist team Richard Rodgers and Lorenz Hart. Just about every character in their  “Pal Joey,” the 1940 musical based on the short stories of John O’Hara, dons an evening guise altogether different than his or her sunlit afternoon persona. From Porchlight Music Theatre at Stage 773, one identity is a big brassy Broadway musical and the other is a low-key lounge act. The latter wins out, but does the audience?

Michael Weber’s production plays against the romantic fantasy of late 1930s Chicago as a glitzy swig of big band and the jitterbug. There’s nothing joyful or particularly spicy about the city, a quality that might appeal to a certain semi-local book reviewer. The seven-person orchestra (music direction by Doug Peck) is more atmospheric than prominent. And, most Chicago-ly, major scene changes occur beneath the sound of a speeding train with flickering lights overhead, mimicking those sparks we see and those rail squeaks we hear on our daily commutes. The piece of stagecraft gives the illusion of being in a nightclub directly underneath the tracks, offering a mighty specific glimpse into the ill-repute of the locale. I imagine that then, as now, businesses below the El tracks tended toward dinginess.

There are a few spots in Porchlight’s slow-moving production (granted, of an uneven script and score) that the ashtray-and-peanut-shells environment boundlessly enhances. Joey Evans (Adrian Aguilar), essentially the older sibling of Sky Masterson, and his relationship to Vera Simpson (Susie McMonagle), a wealthy woman-about-town, is lent dramatic credence by the scenic anti-opulence. And thankfully so because O’Hara’s ambitiously plotted book, for all its gangsters and age-defying love triangles, is as cheery as a summer’s rainbow. “Pal Joey” would, in fact, be Rodgers and Hart’s penultimate collaboration. After 1943’s “Oklahoma!” it was all Hammerstein all the time for nearly two decades.

There are glimpses here into the complexity of melody Rodgers would find in his best-remembered partnership, most evidently in “Pal Joey”‘s enduring number, “Bewitched, Bothered and Bewildered.” McMonagle, not the force of nature she usually is, sings the song with a teenage twinkle. Rather than crooning out a classic, Vera visibly discovers that she’s, well, “bewitched, bothered and bewildered.” I only wish Weber would have staged McMonagle to simply stand at center and sing, rather than graciously tour the audience around the boudoir.

The focal point of the tour is a half-naked Aguilar, our pal Joey, whose performance is as seductive as it is working-class. Taking a power sander to the character’s totally smooth exterior, Aguilar coerces the audience into believing that Joey completely deserves the nightclub he dreams of owning. But, at the same time, we can understand why the commitment-phobe doesn’t have one yet. For this pal, Chez Joey will likely always stay a pipe dream.

All’s not so sooty though. Brenda Didier has contributed some stylish dance numbers with high blood-alcohol levels. Sometimes the small-for-a-musical stage gets too saturated with people, and the best choreographed moments feature only three male dancers. The staging of the women in the lounge—basically strippers—is creative and well-costumed (Bill Morey) but they never quite land the jokes in their broad characterizations. Perhaps the bleak, empty-shell dance-hall girls, hysterical with indifference, in Writers’ Theatre’s “Sweet Charity” are still too fresh in my memory.

“Pal Joey”‘s standout moment comes in the form of Melba Snyder, just as much a thirties Chicago arts journalist spoof as a pointed present-day theater critic parody, played with endlessly silly self-absorption by Callie Johnson. Her jolting number “Zip” pumps some blessed reviving energy into the second act, which otherwise becomes disoriented by crime, money laundering and blackmail plots. This relatively early book musical fails to understand that finales are for resolving complications; not birthing a litter of exhausting new ones. (Johnny Oleksinski)