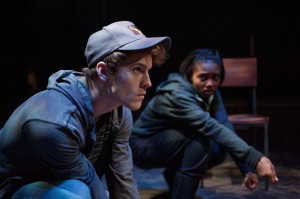 Spotted: Chicago cozying up to Scottish playwright David Greig. Ever since the two lovebirds first met during the National Theatre of Scotland’s touring “The Strange Undoing of Prudencia Hart,” a coup de cœur, the long-distance relationship has quickly intensified. Greig’s work returned to Chicago a few months later when Remy Bumppo mounted his adaptation of August Strindberg’s “Creditors,” and now Writers’ Theatre begins its production of the playwright’s “Yellow Moon.” Get a room, you two!

Yes, Chicago and Greig have been heating up, but, like the best initial pairings, does super seriousness eventually result in complacency? Is the honeymoon over, at least temporarily? Hopefully not, however Writers’ Theatre’s “Yellow Moon” in the old Books on Vernon venue is a definite lull. Another Greig play in verse, director Stuart Carden has excised gobs of creativity from the poetry, adopting the words as mostly auditory mechanisms rather than actions. The text is, per Writers’ manifesto, given preference here, but Greig’s plays are as much about clever ingenuity in physical staging as they are reliant on the verbal color palate.

On the rare occasions that the actors aren’t perched in corners, walking around in circles or seated in close proximity onstage in a square formation, the play accrues some momentum. But even then, Carden never fully embraces the juxtaposition of Greig’s playfulness and his horror. Both are there in the script and both need to be acknowledged in order to engage the audience. Understandably, such contrast in a play featuring mimed cutting and the brutal stabbing of a father figure carries the risk of alienation. Plus, it’s a far more domestic work than “Dunsinane” or “The Strange Undoing of Prudencia Hart,” which feels uncomfortable for Greig. But if not allowed to be, at least partially, darkly comic then the greater risk becomes succumbing to self-seriousness. 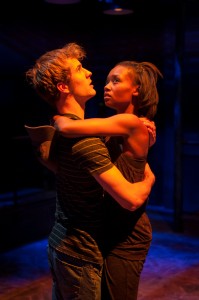 The stabber in question is an angry young man named Lee (Josh Salt), nicknamed Stag (Greig’s imagery fetish continues). His father left him and his mum (Karen Janes Woditsch) years earlier, and she shacked up with an abusive, drunken boyfriend. In a fury, Lee stabs Billy (John Lister) in full view of Leila (Ashleigh LaThrop), his new and only friend, and they run off together. Their journey has the simmering angst of a Wes Anderson film, marked by tiny, exuberant spikes of joy. One such sparkle is a stress-shedding dance between them that very nearly ends in a kiss. Salt and LaThrop let loose, gyrating their pelvises and tossing their limbs in all directions. The spontaneity and bliss of their dance is, I believe, what Greig is going for: drama and personal tragedy punctuated by whimsical uplift.

A couple savvy performances from Salt and Woditsch capture the essence of the playwright’s mangled picture-book. Woditsch emanates a curtailed wackiness about her person that creates the mother as a kind of Roald Dahl character, and the commonplace tone Salt employs when he repeatedly refers to LaThrop as “Silent Leila,” for example, is wryly touching and reveals a sensitivity buried deep within the troubled young man. It’s the blasé direction here that stymies them. (Johnny Oleksinski)