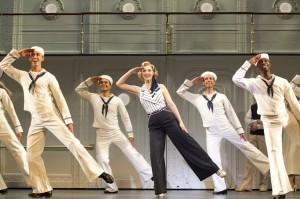 A two-act playlist of familiar tunes, an average production of Cole Porter’s “Anything Goes” dusts off your great grandad’s old gramophone for a quaint few hours of guilt-free thirties nostalgia: a Splenda cruise ship making not waves on the Atlantic, but jolly-good-time ripples. So, surprised was I to discover that Roundabout Theatre Company’s resplendent touring production manages to be fresh, sexy and modernly sarcastic without sacrificing any of Porter’s treasured lyricism. The opening-night audience, my companion noted, was thoroughly sedated from dinner and drinks as the curtain went up, but after Gabriel blew and Reno got her kicks, they strolled out of the Cadillac Palace Theatre in comedic rapture, cheeks still sore from smiling.

A collective sigh of relief is heaved after only a few bars of the well-stocked overture in director Kathleen Marshall’s revival. I haven’t heard an orchestral sound so full—within the confines of musical theater, anyway—since the 2008 Broadway revival of “South Pacific.” At present, Chicago musicals aren’t so much about sound as they are about character. Reduced orchestrations abound from even the biggest theaters in town. Sure, the same trend is evident on Broadway as contemporary styles become further integrated with the stage, but nowhere near as excessively as here, and mostly with newer properties. When reduced to only a half-dozen musicians, musicals pre-1950 lose what gives them their magic: the transportive score. What a treat it is to experience a traditional score, well, traditionally.

After two underwhelming Non-Equity tours earlier this month, “Anything Goes” is a breath of fresh sea air. All of Cole Porter’s piano-bar classics like “I Get A Kick Out of You,” “It’s De-Lovely,” and the title song are performed with brash grins and formidable voices, especially from Rachel York as Reno Sweeney, the old gal forever walking the line between friend-girl and girlfriend. York, like Sutton Foster who originated the role in this revival, has a girlish sensual exterior and a bright blonde wig. Unlike Foster though, York has the cojones of a grande dame of the stage. You know, the sort that downs a gimlet right before belting out a stage standard, sitting cross-legged on the edge of a Steinway; luring in wagging-tongued men just before sending them running for the hills.

John Weidman and Timothy Crouse’s book from the 1987 Lincoln Center revival is again used here with some minor adjustments made by the writing team, and its wordplay is still cutting and grounded in 1934. The farcical scenes (door slam!) coalesce impressively with Porter’s songs, but Weidman doesn’t spend too much unnecessary breath segueing spoken dialogue into musical numbers. “Anything Goes” is and never will be that kind of show.

This production also has a sneaky grasp on cruising in the twenty-first century. Most of us no longer jaunt from New York to England on a luxurious boat filled with glamour and frivolity. If we cruise at all, we’re sneaking a handle of Smirnoff aboard a Carnival fun ship en route to the U.S. Virgin Islands with our cousins from Secaucus. That absurdity alarm in the back of our heads keeps every moment of “Anything Goes” frightfully funny. This could never happen on a cruise! Just look at the cruise ship drama of today. In place of unrequited love and masked identity, you’ll find cell-phone images of sewage.

Marshall’s character-enhancing choreography is best showcased by the explosive ensemble numbers, “Anything Goes” and “Blow, Gabriel, Blow.” The book’s crackling wit is expelled with a gangster’s smooth confidence by Fred Applegate as Moonface Martin, and Josh Franklin makes a geeky, lanky Billy Crocker. But the weak corner of the Reno-Billy-Hope love triangle is Alex Finke’s Hope Harcourt. Finke does not make a confident ingenue, and her singing is downcast and pessimistic. But no matter. This is Reno’s show, and she kills. (Johnny Oleksinski)