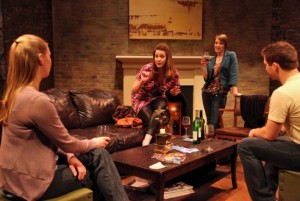 Playwright Nina Raine is very good at investigating tangents. Her characters have mean fun with each other, exploring gender differences, mocking each other’s vocational directions, stirring up painful romantic recollection and discussing the interconnectedness of memory. Everything’s fun and smart and overtly bitchy, but the whole show doesn’t gel into a coherent comment about its subjects. Except maybe that they don’t like each other very much.

At a stylish bar in Oxford, England, Bella (Kate Black-Spence) throws an intimate soiree for friends who haven’t met each other to celebrate her twenty-ninth birthday. Her attempt to stifle her problems with her ill father (Sean Sinitski) fails and spills out into interactions as her companions proceed to tear into one another. The script is detailed and no-holds-barred, but doesn’t pull together.

The performers do what they can; this ensemble works hard and it shows. Black-Spence negotiates the emotional demands of being a bitchy “it” girl who’s losing an important part of her life; Melanie Derleth puts across her character’s competence without affect or ego. Dennis Grimes captures Richard the lawyer’s yuppie vulnerability while Nicholas Harazin brings his criminally underwritten part to life through empathy and longing. Sinitski competently discharges the thankless job of reminding young mortals that time is fleeting. But the revelation of the show is Dana Black, a force of nature who thankfully knows how to share.

Elly Green’s staging pulls the script’s flashbacks together in an artful way and expertly exploits Joe Schermoly’s chi-chi set.  I just wish the characters valued each other as much as they valued a joke at each other’s expense. (Lisa Buscani)