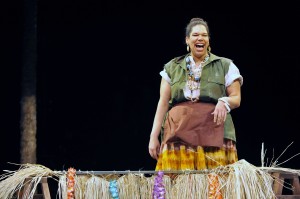 There is a lot of Richard Rodgers being heard around town this spring, from the rarely heard Rodgers and Hart “Pal Joey” at Porchlight and the first-ever Rodgers and Hammerstein collaboration “Oklahoma!” which opens this weekend at Lyric Opera, to Marriott Theatre’s production of R & H’s “South Pacific,” which boasts that duo’s most well-known and beloved score.

Considered by many to be the most romantic musical ever written, its tale of two star-crossed lovers—each involving American service personnel stationed in an exotic island locale—really struck a deep and resonant chord with postwar America.

That “South Pacific” is not done more often despite such popularity may in part be due to its subtext of racial prejudice, still a hot-button issue. But there are also the demands of the score, which are considerable. Italian bass-baritone Ezio Pinza originated the role of Emile de Becque and the show’s recent Broadway revival featured a succession of operatic baritones as well.

Why then, David H. Bell’s Marriott production miscasts a tenor in the role, and a show tenor at that (Stephen R. Buntrock), is a mystery, but it squanders some of the best music in the show as without the vocal heft needed, “Some Enchanted Evening” lacks, well, enchantment. Not helping matters is an unconvincing French accent and a general lack of confidence, or swagger, along with a lack of chemistry between the leads.

As the principal dramatic device of the show, that could well torpedo a “South Pacific” into the depths, but thankfully, Elizabeth Lanza’s Nellie Forbush adds so much to that role that it maintains our interest, at least in her solo numbers if not the love duets.

If de Becque and Nellie cannot generate sparks, at least there is the second set of lovers, Ben Jacoby as Lt. Joe Cable and Emily Morales as the islander Liat, who are far more convincing. You can really feel Cable’s sense of wonder in this production as he sings “Younger Than Springtime” to her.

Chewing up all the scenery and stealing every scene she is in, Bethany Thomas makes a spectacular Bloody Mary and has the most effective musical moment of this production, a rendition of “Bali Ha’i” that is tender and evocative when it needs to be yet powerful for emphasis.

Matt Raftery’s choreography is serviceable and well-executed by an energetic ensemble and Robert Russell Bennett’s original orchestrations are effectively evoked by a ten-member orchestra of acoustic and electronic instruments conducted from keyboards by Patti Garwood. (Dennis Polkow)