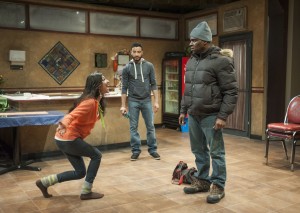 A blizzard rages outside of an Indian restaurant in Cleveland, Ohio. Weather being nature’s indicator of theatrical tumult yet to come, the wind howls maliciously. Unlike Tennessee Williams’ plays of heat, Rajiv Joseph’s “The Lake Effect,” which opened on Saturday at Silk Road Rising, is a play of ice.

In most family dramas, a non-selective club of which “The Lake Effect” is a member, there’s typically some scandalous carnality, often incestuous. But there’s no sex here; only frostbitten pasts and presents. Joseph’s world premiere is very much a modern-day spin on that traditional family story. The plot is still, like an O’Neill or a Miller, dependent on scorching revelations, providing as much comedic relief here as shock. However, the secrets in this play expose grander truths about society—our relationship to race and money—rather than just a sequestered time and place. A promising trend—one that I also noticed in Branden Jacob-Jenkins’ “Appropriate,” which plays Victory Gardens next season—contemporary spins like “The Lake Effect” look to resuscitate this most American of genres.

Two siblings, Vijay (Adam Poss) and Priya (Minita Gandhi), do not return to an estate with a life of its very own; they reunite at a restaurant, a business. The restaurant, which though Indian, reminds me of Uptown Taqueria, eradicates from this story any homestyle nostalgia, and consequently commerce becomes the crux of their brotherly-sisterly assaults. We learn that Vijay was a generic Wall Street paper pusher until he lost his job, and Priya runs a maritime property-recovery business with her African-American husband that she told no one about. Well, she did tell her father after the deed was done, and dad became so irate that he attacked the man he believed to be her husband. Well, he wasn’t.

The children both look to claim a piece of their father’s money and belongings, but there is a clog in the pipe named Bernard. The bundled-up African-American fellow (Mark Smith) wanders into the restaurant—that Vijay angrily asserts is closed—and orders some lamb biryani. He tosses his order out like it’s the usual, never once looking at a menu. Bernard then offers, with the offhandedness of a regular customer, a series of disconcerting bites of information about Vijay and Priya’s father, who he calls Vinny. The most game-changing: that the workaholic was a gambler. On the night Vinny died, he won eighteen-thousand dollars off a football game. How does this strange, glass-half-full man know all this?

Although Joseph is best known for his Broadway show, “Bengal Tiger at the Baghdad Zoo,” “The Lake Effect” more closely resembles his “Gruesome Playground Injuries,” a sublime treasure in which a man and woman’s relationship is chronicled over two bruising decades. “The Lake Effect” is nowhere near as sprawling, spanning just a few days, but the playwright’s keen eye for tense, one-on-one human interaction is, once again, given top billing.

The ninety-minute play consists of only three long scenes and a monologue, but Timothy Douglas’ direction intensifies each moment to a point of crackling satisfaction. Smith has the formidable task of keeping Bernard interesting beyond the question of who he is and what he’s doing in this restaurant, but his welcoming charisma and deep love of Vinny is immensely engrossing. Poss played what amounted to a villain in “Teddy Ferrara” at the Goodman earlier this season, and he brings his same joking vindictiveness to Vijay. So many of his character’s actions are impossibly cruel, but you never hate him. Some of Vijay’s scorn and resentment might come from his mother’s death in a car accident twenty-four years earlier. At twelve years old, he was not in the car but his sister and father were, and he still feels the sting of the loss. Gandhi’s Priya is flitty and flighty and rambles at length about what her therapist says, but she’s ultimately more mature than her brother emotionally. Morally, though, perhaps not. (Johnny Oleksinski)