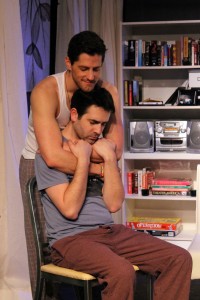 Writing a play of divisive issues is no small feat. Some critics will decry the work as preachy, manipulative and disguising the playwright’s political agenda, while others might find that the issues take precedence over the characters. It’s terrain that’s not only rocky but also littered with a war’s-worth of buried land-mines.

Those lurking dangers are what make playwright Geoffrey Nauffts’ “Next Fall” so darn impressive. The Tony-nominated play, receiving a Chicago premiere by AstonRep, puts the spotlight on hospital visitation rights for a gay couple with a marked age difference in which one man is an agnostic and the other is a devout Christian. A two-act drama or late-night comedy show sketch, you ask? “Next Fall” is a little bit of both, which is why the adroitly built play—how shocking it is that no larger theater programmed it yet—eludes those many traps and pitfalls.

When I saw “Next Fall” on Broadway in 2010, even in the relatively tiny Helen Hayes Theatre, I thought this tremendously caring show was overwhelmed by the space’s own tremendousness. Nauffts originally opened it off-Broadway in the much smaller Peter Jay Sharp Theatre, and Heartland Studio, which houses AstonRep’s production, is but a fraction of that. It’s the intimacy that gives this production its truthfulness and believability. And that’s just about all “Next Fall” needs to affectingly make its mark.

Derek Bertelsen’s physical production is admittedly quite messy. The transitions are overlong, filled by projections that could be done without, and the settings—a hospital, an apartment, a rooftop, Central Park—would benefit from some innovation in their representation. But the performances—most especially Mark Jacob Chaitin and Ryan Hamlin as the couple Luke and Adam, and Curtis Jackson as their mutual friend Brandon—bring a reality to the play that defeats any aesthetic defects.

Where Hamlin and Chaitin go so right that their Broadway compatriots went gently astray is imbuing Luke and Adam’s four-year-long relationship with a worn-in, ho-hum routine. Yes, their characters love each other very much, but it takes a horrible tragedy, Luke being hit by a car, to remind them of that. More so than in 2010, I was able to discern shards of every relationship, gay or straight, in these two uncommonly well-written, neither-pretentious-nor-daft people. “Next Fall” is more empathetic than most plays you will encounter today, and resultantly its social issues do not go resented.

Luke and Adam have an unassuming relationship of private problems, the biggest being that Adam is agnostic (I’m going with agnostic because his reasoning isn’t so much science as it is his pessimism) and Luke is an avowed Christian. He was raised that way, and he’s remained so into adulthood. Luke prays after sex and he worries that Adam will go to hell and they will not be together in the afterlife. A twentysomething, Luke is also not out to his parents, Butch (Jim Morley) and Arlene (Lona Livingston), who we unfortunately are introduced to in the hospital along with Adam’s good friend Holly (Aja Wiltshire) as they hope and pray that their son, lover and friend stays alive.

These ideological differences would be huge rifts in any relationship, but Adam and Luke’s situation, somber and angelic, brings up some personal questions. What makes me me? What makes you you? Do our beliefs, hobbies, idiosyncrasies, looks and passions draw us to our romantic partner or is it something altogether different, deeper, impossible to discern with the naked eye or focused mind? So much art is created in an attempt to articulate the meaning and being of love, which could be why all art is inherently imperfect. As far as plays and playwrights go, Nauffts understands that and it shows. (Johnny Oleksinski)