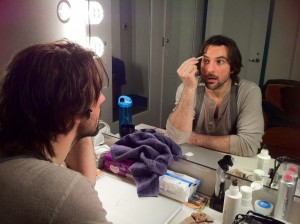 David Adam Moore is an anomaly in the cast of Lyric Opera’s upcoming production of Rodgers and Hammerstein’s “Oklahoma!” A baritone who performs regularly with companies around the world, Moore is the only traditional opera singer of the pack, which quite impressively includes Broadway notables Ashley Brown (“Mary Poppins” and Lyric’s “Show Boat”) and John Cudia (“The Phantom of The Opera”), and is directed by Chicago and New York’s shared son, Gary Griffin.

Moore has come to “Oklahoma!” direct from Lyric’s recent, electrifying production of André Previn’s “A Streetcar Named Desire” in which he played Stanley Kowalski during the student performance—a most memorable experience at a company he’s become incredibly fond of. You might expect a guy who regularly inhabits fearsome foes like Stanley and Jud to come across more intimidating than, say, a Curly or a Mitch, but Moore is as pleasant and easygoing as can be. He’s honored to be a part of this production, the first in a five-year series of Rodgers and Hammerstein shows at Lyric, and he doesn’t mind in the least being the only person onstage with an opera background.

“It’s funny because most of this feels like familiar territory for me, but the main difference here is that I’m working with an entire production full of people who are from the musical theater world. It’s in that sense that it feels like I’m doing something new.” What has been different in practice is the amount of flexibility musical theater affords him. Singing only “Poor Jud Is Dead” and “Lonely Room,” Moore enjoys playing around with subtle variations in his character’s spoken dialogue. The possibility of changes is freeing for him because “in opera these things are fixed generally.” Also there is an expectation in the opera world that the performer show up to the first rehearsal completely memorized or risk being fired on the spot. Not so much in musical theater.

“Other than working with a larger quantity of dialogue than I normally do, I can’t say there’s been much about putting this together that’s different from what we do in opera, and I was expecting it to be a lot different.” He has danced before, for example, in productions like Leonard Bernstein’s “Candide,” which is the closest piece to musical theater that he’s previously worked on. But he has certainly clung to his athleticism to keep up with “Oklahoma!”‘s ninety-one-year-old choreographer Gemze de Lappe, here in Chicago recreating the Agnes de Mille choreography that she herself danced during the 1943 national tour.

“Yesterday was just me and Gemze, and I thought she was just going to sit in the chair and—” he makes move this way, move that way gestures. “No! She gets up, grabs me and—” Moore demonstrates de Lappe doing a high-spirited dance in tandem with him. “She’s just going all around me, and I’m like, ‘I wanna be like you when I grow up.'”

He’s well on his way. Besides his multi-existence as an opera singer (and a big Benjamin Britten fan), a musical theater actor and a visual artist, Moore is very much an athlete, and the diversity of roles he sings requires of him a certain stamina. “From a craft point of view, this is an actor’s dream.” He elaborates on a specific experience, “But it certainly was daunting. I sang a performance of [Peter Eötvös’] ‘Angels in America’ as Prior Walter on January 15 [with the Los Angeles Philharmonic] and then on January 16 I began rehearsals as Stanley Kowalski.” Portraying a gay man with AIDS to an abusive southern boozehound, Moore gained about fifteen pounds in the months leading up to that performance.

A remarkably calm and centered person, Moore appreciates the focus that physical activity brings to his daily living, and he especially enjoys exertions that have a practicality to them. So, in January 2008 when he was looking for a sport more invigorating than running and biking, he found parkour through a grassroots New York organization called NYPK. “I went to that first class, and I was hooked.” Parkour, which garnered attention recently thanks to inclusions in action films like “Casino Royale,” involves reaching point-B from point-A in the most economic way possible, leading to some remarkable physical feats. “Other martial arts teach you how to defend yourself in close combat or to inflict damage in close combat, whereas parkour is the skill of evading and pursuing.”

Moore is not an easily defined person, and all of these quirky disciplines add up to a singular artist. “I’m a performer first. My primary aim is to express and to tell a story. And then these other tools that I’ve worked to develop are just vehicles for that.” He elaborates, “One of them is singing operatically, and as a result I’ve become a part of this whole opera world and opera tradition, and that’s amazing, but ultimately my only aim is to move or amuse people.”

“Oklahoma” begins at Lyric Opera, 20 North Wacker, on May 4 and plays through May 19. For tickets, visit lyricopera.org.