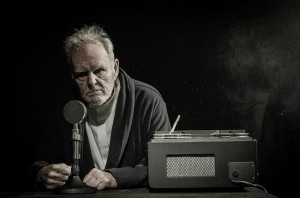 Rick Cluchey’s performance in Samuel Beckett’s “Krapp’s Last Tape” is a surreal exploit that goes far beyond docile entertainment and way past profundity; it’s living history. Previously performed in Chicago by the seventy-nine-year-old actor at the Goodman Theatre in 1980, this production was originally directed by Beckett himself in 1977. No, you did not misread or misunderstand. The playwright, among the most culturally significant of the twentieth century, himself guided and physically staged Cluchey’s take on Krapp. Beckett directed several productions of his own plays, but Cluchey’s is special in that it continues to thrive, and was born of an exceptionally led life.

The performer was incarcerated for armed robbery in San Quentin Prison for over a decade, given a life sentence without opportunity of parole. Released in 1966 after devoting his time and passion to the San Quentin Drama Workshop, which he co-founded, he encountered Beckett on a European tour of “The Cage,” a play Cluchey wrote. Their friendship and seven-year artistic kinship led to this extraordinarily vital production. The actor admits certain sections of “Krapp’s Last Tape” have slowed down overtime, but that’s a natural progression rather than deviation with purpose. What you’re getting in each move—Cluchey’s Krapp contorts his hand into a bird’s claw before swooping into a desk drawer to snatch a couple bananas—and gnarl are Beckett’s unadulterated intentions. And though Beckett died in 1989, flesh and blood intent is a rarity and an invaluable gift. Heck, Tennessee Williams died only six years earlier and left reams of writings, but his true desires are still questioned and pondered ad nauseam.

A double bill of the one-act and a discussion with the actor, “An Evening of Beckett” is catnip for the theater-history geek, but moreover an unexpectedly potent play for our current technological climate. That Krapp’s confidant is an old reel-to-reel tape recorder, playing his own voice, might seem to negate my assertion, but never in history more than now have we so obsessed over capturing ourselves in one artificial medium or another. If Google Glass has its way, we’ll be snapping photos up to “the cloud” with a mere tilt of the head. On Vine, we’re sharing video clips of the most arbitrary moments. On Twitter, we’re typing away our instantaneous gripes and elations without second thought. For better or worse, barring that the internet doesn’t all at once collapse, all of this data will be waiting for us in old age, a depressing or promising reminder of who we used to be. Making the secondary character a tape was wise beyond Beckett’s century.

On a major scale, the one-man show was last presented in Chicago by the Goodman starring Brian Dennehy, alongside Eugene O’Neill’s “Hughie,” which originated at the Stratford Festival in Ontario, Canada. And in that double-bill, the O’Neill play was worn by Dennehy with far more ease than the Beckett  play was, the actor being the foremost interpreter of the American playwright’s barroom brawlers. As valid an interpretation as any, Dennehy’s Krapp was pointedly antagonistic—looking onward into the darkness and picking a fight with some invisible detractor. Cluchey’s Krapp is smaller, more self-deprecating, defeated by the oppressive darkness. The sounds that escape his grizzled mouth are strained wheezes, which contrasts so devastatingly to the recorded tape of his younger self. The tape used in this production was actually recorded in 1977 during the original staging, a fact that still puts my hair on end, for the performer is really in conversation with his forty-three-year-old self. Cluchey’s pleasant recorded voice is a product of the seventies, with an attentiveness to each syllable and a whispered serrated-ness recalling the parlor room rhetoric of Vincent Price and Orson Welles. It melds gruesomely with Krapp’s bleak present.

The evening ends on “Sam and Rick,” a conversation between Cluchey and a theater professional, different each night. The talk enhances the performance you just witnessed with real-life anecdotes about the actor’s relationship to Beckett and his own rather extraordinary life experience. There is much wisdom to be gleaned from this performance equally for the burgeoning theater novice and the seasoned aficionado, as divisive a playwright as Beckett today remains. How inspiring it is to see a man’s personal triumph over adversity and his incomprehensible perseverance carry over into his life as an artist. (Johnny Oleksinski)