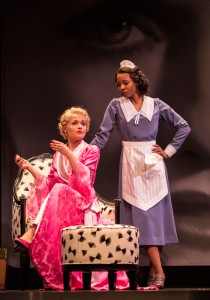 The sturdiest moments of “By The Way, Meet Vera Stark,” which opened on Monday night at the Goodman Theatre, have the audience gazing up at the stage, eyes fixated on actress Tamberla Perry, and wondering, What movie have I seen her in? “Imitation of Life,” perhaps? “Gone With The Wind”? You recognize Ms. Stark, played with a keen social intuition by Perry, from somewhere, but can’t quite say from what. Well, playwright Lynn Nottage has got you fooled. Vera Stark is a fictional amalgam of most every under-appreciated African-American starlet of the 1930s; those pathetically resigned to maid roles far beneath their acting talent.

I presume the real-life figures Nottage held most prevalently in mind when writing “Vera Stark” were Louise Beavers and Fredi Washington, two African-American actresses who played opposite Claudette Colbert in the Oscar-nominated 1934 “Imitation of Life” and won off-the-charts critical accolades, but went unrecognized by the Academy of Motion Picture Arts and Sciences. This was only five years before Hattie McDaniel would become the first African-American woman to win an Oscar for “Gone With The Wind.” The multifaceted story of these overlooked performers and their struggles in the face of a populace both hungry for silver-screen entertainment and cool toward racial integration deserves to be told, and Nottage has chosen satire as her relaying mechanism. It’s that choice that ultimately proves uninteresting and uninvolving.

Not that the satire isn’t funny; I laughed quite a lot at the thrown quips and undercuts. But the satire isn’t so much biting as it is nagging. The observations made and the seventy-year leap from the first to second act are nowhere near as trenchant as they could be, given the subject matter, and offer middling insight. What unfolds is a traditional Hollywood satire that is all too aware of the injustice it depicts. Vera begins as a housemaid with celluloid dreams, working for a major movie star, Gloria Mitchell (Kara Zediker). When the two are both cast opposite each other in the same film, “The Belle of New Orleans,” their servant-and-master home life collides onscreen. 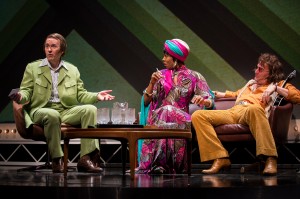 Seventy years later in 2003, a lecture led by three academics, “Rediscovering Vera Stark,” analyzes the final 1973 interview with Mitchell and Stark on the fictional Brad Donovan Show, just before she disappeared. Keeping up appearances, the scholars are satirized as well, becoming collegiate caricatures with monikers the likes of Afua Assata Ejobo (Amelia Workman) and Carmen Levy-Green (TaRon Patton). They disdain each other’s equally staunch opinions and talk eloquently in circles around simple conclusions. Most telling though, and likely the truest part of this play, is Levy-Green’s recollection of seeing the vanished Stark in old age, now a homeless woman—a tale that Ejobo vehemently refutes as there are frequently reported Vera Stark sightings. Carmen’s story and the other theories of what happened to Vera prompt questions about the fate of actors who, by starry-eyed standards, had seemingly achieved it all and were living the American dream, but succumbed to severely prejudicial circumstances.

In the spirit of satire, I suppose, all of the performances have a distancing immensity to them. The juggernaut size works well for the scholars because they’re not the people onstage with whom we’re seeking to connect. But to paint an old Hollywood star as vapid and unflinchingly narcissistic is a well-worn cliche; crafting a black maid as perpetually sarcastic is expected. The playwright might be aiming to awaken our subterranean perceptions and stigmas in order to question the reverence our culture has shone on these classic films that supposedly hearken back to a brighter yesterday, but that end is never reached.

“By The Way, Meet Vera Stark” is hampered by its superficiality. The stakes the characters face never achieve much momentum in Chuck Smith’s production, and Nottage’s chief criticism—that these worthy actresses have been lost to history and hearts in favor of the world’s Claudette Colberts—quickly runs its course. By far, the funniest and most enjoyable sections are the filmed interludes (that the talk-show interview is staged and not filmed is strangely incongruous), lampooning the heightened pomp of Hollywood’s golden age. Dramatic head turns, enormous eyes, and thunder claps of underscore all reap deserved bouts of laughter. But hilarious though they may be, those vignettes have little to do with the point the play endeavors to make. (Johnny Oleksinski)