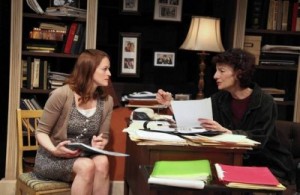 Following six years in the complex relationship between an established writer/professor and her aspiring protégée, Donald Margulies’ “Collected Stories” is a study in mentor/mentee dynamics that is both philosophical and touching, broadly recognizable and specific. Most of us have had at least one mentor, and some of us have even had the honor of being one. “Collected Stories” examines the sometimes contradictory emotions that being on either side of the equation can evoke.

As a respected and perhaps past-her-prime Greenwich Village writer, Carmen Roman’s Ruth is both relatable and unflinchingly blunt, able to diffuse a student’s harping questions with a sharp look but also capable of turning on the charm at a moment’s notice. Gwendolyn Whiteside imbues the determined and earnest young graduate student Lisa with an endearing peppiness, both sly and eager to impress Ruth and the literary public in general. Together, these two talented women plow through this story of connection, success and, perhaps, unexpected disappointment in this strikingly raw and honest two-hour production (with one ten-minute intermission).

This is a two-person show filled with pointed conversations and co-directors Mary Ann and Jessica Thebus (a mother and daughter team) ensure that each moment is infused with a deep sense of honesty and investment. Though they’ve worked together before, this is the first time the duo has directed a full production together and their talents seem impressively aligned.

Set in Ruth’s Greenwich Village apartment—lovingly captured in Sarah E. Ross’ lived-in set—Margulies’ script chronicles the delicate power plays that inevitably come from any mentorship that is truly successful. Lisa initially idolizes and dotes on the powerful and remote Ruth, hanging on her every word and carefully recording her suggestions, parroting her own words back to her. But as time passes and the two become more than just professional acquaintances, Lisa is able to see her idol as the fallible human that she is, slowly shifting their relationship and their connection.

“There is nothing worse than getting what you want,” Ruth knowingly tells Lisa after they read Lisa’s first critical rave together. And in that moment we understand that it’s true not only for what one wants for oneself, but what one wants for others as well. Maybe watching your student achieve a level of success quicker and easier than you anticipated is not as empowering as you thought. Maybe, even against your own wishes, it’s actually a little disheartening. But Margulies (as well as Roman, Whiteside and the Thebuses) is too subtle for such a simple takeaway. Debates rage throughout, particularly in the lengthy and emotional climactic scene, with neither side caving and the script offering no easy answers.

In the performance I saw, during the final scene, a well-dressed young woman sitting near me let out a strangled sob before clapping her hand over her mouth. Whether she was relating to Lisa or Ruth (or just the unresolvable conflicting interests of both parties) that sob is a stronger endorsement of the dramatic tension currently on stage at the Richard Christiansen Theater at Victory Gardens than any words I can offer. (Zach Freeman)