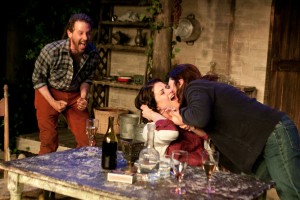 There’s no tragedy like a Greek tragedy; outsized bad decisions from deeply flawed characters, combined with unknown information make for eye-popping, head-spinning catastrophe. And parts of Sheila Callaghan’s “Lascivious Something” live up to that age-old tradition; other parts just seem to lack purpose.

Expatriate August (Joe McCauley) is living with his young wife Daphne (Simone Roos) in Greece during the nascent Reagan era. A former activist, August has transferred his attentions from firebrand politics to transforming his wife’s vineyard near their small inn. Unexpectedly, they receive a visit from August’s ex-lover Liza (Georgann Charuhas), looking to return something to August.

The wine flows freely, so inhibitions are low; it’s a vineyard, after all. Callaghan’s script goes overboard on the plot options and the sex. August and Daphne’s marriage is passionate, but so is the relationship between August and Liza. Problematically, Daphne’s bisexual leanings are presented as pedophilic and destructive. Her relationship with a village girl addressed as Boy (Cassidy Shea Stirtz)  seems to add unnecessary kink to the story; these folks are screwed up enough.

Ronan Marra’s staging gets a bit too literal at times and the necessity of the period escapes me (given Greece’s current economic woes), but the poetry of Callaghan’s script carries audience members through. It’s truly lovely to listen to. The tragic fireworks at the end will catch you by sad surprise. (Lisa Buscani)