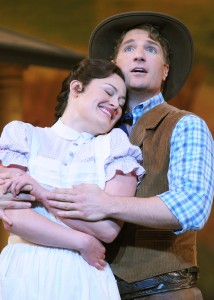 When Renée Fleming was announced as Lyric Opera’s creative consultant in December of 2010, she related that the company would have an “annual commitment to American musical theater” beginning with Rodgers and Hammerstein’s “Oklahoma!” in non-subscription performances in the spring of 2013. Before that production was even out of the box, Lyric recently announced a five-year R & H initiative.

The justification offered for an opera company already straining to present a diversity of operatic repertoire to focus its limited resources on musical theater that is already widely performed and available in other local venues was, according to Fleming, that such works “emphasize our own strengths and also encourage those who love musicals to give opera a try. With classic musicals, the singing is more closely linked with the type of singing that we do here, and Lyric is poised with such resources to do spectacular productions.”

In the case of the new production of “Oklahoma!” that opened Saturday night at Lyric, it was easy to see where and how the resources were being used, as the three-dimensional sets were impressive as was the presence of a full company of dancers and singers, and a thirty-seven-piece orchestra, large by Broadway standards, but a chamber orchestra by operatic standards.

The biggest surprise as the curtain was raised and Aunt Eller (Paula Scrofano) was churning butter was that what was written as an offstage voice gradually coming into focus singing “There’s a bright golden haze on the meadow” was disruptively echoing from the upper rafters with large reverb.

John Cudia is not only too old for the role of Curly, but he is a tenor, a show-voiced tenor at that, best known for singing pop roles such as Lloyd Webber’s “Phantom of the Opera” and Jean Valjean in “Les Misérables.” It is that aesthetic and fach that Cudia brings to Curly rather than the darker and heftier operatic-like baritone that the role was written for and that, ironically, has been employed here in other productions not presented by an opera company. Of course, had Lyric stuck to Fleming’s original vision in its casting, a trained baritone would have been heard through the house without having to be so distractingly amplified.

The same was true for Ashley Brown as Laurey, also too old for the role with a quivery show voice dependent on amplification rather than the flexible lyric soprano that the role calls for. In fairness, Cudia and Brown act well together, but their duets were hampered by over-zealous and unpredictable sound enhancements.

In fact, oddly enough, there was only one major role in the show that was actually performed by an opera singer, and that was baritone David Adam Moore’s portrayal of Jud, although there were opera singers in ensemble roles that also sang the chorus numbers.

Adding to the sonority issues, the orchestra, which was conducted by James Lowe, was overpowering in the brass and woodwinds but the strings could barely be heard underneath the amplified voices. 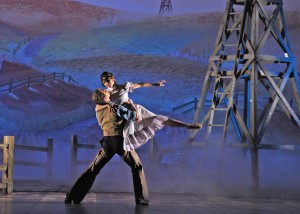 Much has been made of the presence of ninety-one-year old choreographer Gemze de Lappe, who played the “Dream Laurey” in the original national tour of “Oklahoma!” some seventy years ago, and her careful attention to reconstructing the show’s original Agnes de Mille dances. It was great to see a full dream sequence at the end of Act I, but the production numbers seemed a bit uneven in their execution and energy.

In fact, apart from the obvious miscasting issues, the overall production suffered from a sense of generic over-reverence for an admittedly important and innovative work, and never seemed organic with a specific vision or point of view. Director Gary Griffin certainly did a wonderful job with the quality of the acting for the spoken dialogue portions, even if hearing them was sometimes a challenge with the constant tweaks to the sound. But then when a sung or danced portion entered in, it was as if the production were constantly shifting gears rather than the seamless drama into music and dance that this revolutionary work pioneered.

Is this production ultimately worth catching? Certainly the opportunity to experience “Oklahoma!” with all of the trimmings is fairly rare, only Light Opera Works has taken the trouble to give us a complete production with the original orchestrations, songs, interludes, dances, et al, in recent years. But to be honest about it, they did a better job of catching the spirit of the show and using voices more aptly suited to it than, for all of its extravagance, this production does. (Dennis Polkow)