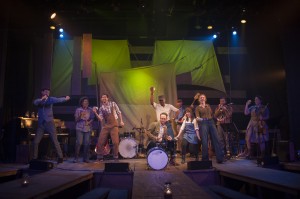 There’s disagreement on exactly what mood House Theatre is trying to achieve within its campfire concert, “Ploughed Under: An American Songbook.” The upstairs theater at the Chopin is configured into a nightclub, atmospherically well-suited to a musty rockabilly gig or the Country Bear Jamboree. From the stage, five long wooden tables reach out like rays of sunlight and the rest of the large space is studded with round tables, each with a burning candle. There is some raked seating in the back, but that’s for me and the other lepers. All in all, it’s a pretty happy room.


However, Kevin O’Donnell’s playlist, hard not to admire in its sweep, is nineteen depressing stories of factual history mixed with folk Americana, amounting to a tonal wash o’ bummer rather than any discernible, satisfactory dramatic through-line. When the concert begins with lyrics as downbeat as “Centuries of Native men/ Are buried underground/ And deep within the fields we see/ The blood of slavery,” you get a good idea of the shape the evening will take. And that is a perfectly adequate tale to tell. So, why the club vibe complete with an always-open bar? Why the hipster aesthetic? After all, O’Donnell’s songs aren’t that trendy, though I hasten to admit that I was more than once reminded of Electric Light Orchestra’s “Mr. Blue Sky,” but with a bluegrass sound and an indie ‘tude.

That could be because of the nonstop percussion and monosyllabic phrases. The theater actually provides little black binders featuring the song lyrics on every table, and many an audience member’s nose was buried in it for the entire performance in an effort to keep track. There was nothing to watch, but much to be heard—any number of stringed instruments, chains and a kiddie piano. The songs are dependent on words rather than the emotional contours of the music—all of which sound identical—but the lack of fluidity in the lyrical phrases makes it impossibly hard to string together sentences. More often than not, at the end of the song, you realize you didn’t quite catch what happened in the preceding three minutes, even with the uncomfortable banter-some narration that introduces each number.

O’Donnell, who plays percussion on stage and who I consider myself a fan of as far as Chicago theater composer-arrangers go, should not have directed his own compositions. “Ploughed Under” could, perhaps, work more theatrically than musically if staged with clarity, creativity and that little House twinkle in the eye, but not as a plain old assortment of songs. The lyrics are such black-and-white, literal narratives that they’d benefit more from being staged stories than a concert. (Johnny Oleksinski)