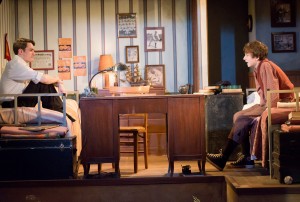 People who live in the kind of twisted families only Tennessee Williams could write must look at Neil Simon families and think, “well, that sounds nice.” While neither type of family is exactly better off, the Jeromes at the center of “Brighton Beach Memoirs” have a plucky sense of optimism. Despite dire circumstances akin to “A Streetcar Named Desire” and “The Glass Menagerie,” the family in this play never projects the bleakness of their situation, and that feels a little unrealistic by comparison. Raven Theatre dusts off this tried-and-true classic to finish out its thirtieth season.

“Brighton Beach Memoirs” is the story of a New York Jewish-American family caught between the scourges of the Great Depression and the onslaught of WWII. Narrated by fast-talking Eugene (Charlie Bazzell), each character of the family and their problems (mostly financial) are rapidly introduced and cleanly solved. Widowed Aunt Blanche (Liz Fletcher) and her two teenage daughters Nora and Laurie depend on the kindness of her sister Kate (JoAnn Montemurro) and husband Jack (Ron Quade). Kate and Jack have two teenage sons of their own, but for a house so cramped, there’s relatively little conflict. A few clichéd conversations between brothers Stan (Sam Hubbard) and Eugene pertaining to puberty and awkward incestuous desires create some of the laughs here, but the stakes increase when each character must make financial decisions that impact the delicate balance of the Jerome house.

“Brighton Beach Memoirs” has probably been running in regional theater somewhere in this country every night since its original Broadway presentation in 1983, so what makes any production distinct? Though locked into a very specific historical time and place, if done well, Simon’s play can still manage to pique interest into a world before modern technology and the political changes brought on by WWII. Part of the time-capsule quality Simon captured in this first chapter of his Eugene trilogy is the well-crafted sitcom style seen on television and radio throughout the midcentury.

Although irritatingly sentimental at times, director Cody Estle seems to have streamlined this show away from the schmaltz and focuses instead on story. Faithful and vivid, this production is accented by strong performances from Sam Hubbard and JoAnn Montemurro. While not exactly reinventing the wheel with this selection, Raven Theatre brings this story to life in captivating monologues and low-key acting choices. It’s an easy reach to make the Eugene character a total ham, but a young Charlie Bazzell does well in navigating where to go big and when to reel it in.

The play ends on the line, “everything is all right.” This essential theme tends to hinder the intensity of the piece. No matter what misfortune befalls the Jeromes, their glass-half-full attitude rarely changes and perhaps that’s a testament to Neil Simon’s tidy playwriting. For an audience member dealing with real strife, “Brighton Beach Memoirs” may warm the heart but fails to thrill the spirit. It’s hard to have compassion for a family in which things aren’t always great, but they’re never that bad either. (John J. Accrocco)

Note: After this review was published, Newcity discovered that the author had a personal conflict of interest that should have resulted in him recusing himself from reviewing the show. While we can’t undo the damage that publishing this has done, we want to make sure that readers take this in account. The writer will no longer review theater for Newcity.