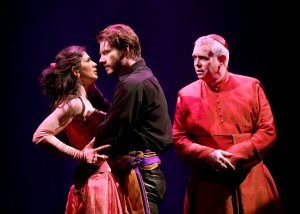 There is churchly ambiance to “Henry VIII,” which opened Wednesday night at Chicago Shakespeare Theater. Catholic clergymen clad in red vestments descend the central aisle to the stage in grand and contrived fashion. There’s enough shimmering hung fabric for another papal coronation, and the palpable vibe among the attendees is one of religious obligation—a common drive for Shakespearean theatergoers, believing the Bard to always be of crucial cultural significance, no matter the delivery. That push is even stronger in this particular instance.

“Henry VIII,” directed by Barbara Gaines, is reportedly the first professional Chicago production of Shakespeare’s (and likely John Fletcher’s) play, and it was quite rightly programmed on the pier for its four-hundredth anniversary. The popularity of “The Tudors”—is the TV show truly that popular?—is cited as further justification for this staging of the story of Henry VIII, Anne Boleyn and Queen Katherine of Aragon, and that flawed reasoning is aesthetically pungent.

Henry (Gregory Wooddell is a great deal more traditionally attractive than his historical counterpart) has hipster mutton chops befitting a Duke of Williamsburg, Brooklyn, and all the men don leather chaps capped off with high-laced combat boots. However, Shakespeare’s “Henry VIII” is not, alas, Showtime’s “The Tudors;” they share characters and plot-lines, but what was sensational and risky then, as interpreted by Shakespeare, is convoluted political minutiae now. Shakespeare’s play—by no means a lost gem—is not so sexy and not so delectably scandalous, as is evidenced by this text, stringent even for a history play. It’s a quality Gaines is visibly aware of, made apparent by her buxom staging. The director squeezes as much risqué dalliance as she can out of the script, spicing up dances between Anne and Henry, banishing citizenry into a metaphorical incinerator upstage and showering the newly crowned Boleyn (Christina Pumariega) in golden glitter. Admirably, the physical scenery is restrained and minimal.

But Anne, Katherine and Henry’s emotion-heavy marriage drama is not what needs enhanced clarification in this otherwise slothful production that fully engages only in its unspoken, appended moments. The power struggle between the clergy and the House of Tudor is opaque like a cautious spring fog. The Catholic cardinals and the Bishop of Canterbury have been folded into the mix lazily, and this is apparently an England where priests can shove blood royalty (though Katherine is turned away by Henry, she is nonetheless Spanish royalty) to the ground in an out-of-place maneuver very nearly resembling a rape. The regality, in nearly every instance, is eschewed in favor of the behind-closed-doors societal equality of a French farce. In making the conflict solely personal, rather than political or national, the stakes stay domesticated and the proceedings dense. Shakespeare, as a nod to the late Queen Elizabeth, threw in the jubilant birth of the young princess in the play’s end: a light at the end of the off-with-her-head tunnel played here by an absurd Fisher Price-looking plastic doll, cheese-ball baby murmurs and all.

Gaines’ “Henry VIII” depicts womankind being brutally bound by an unforgivingly patriarchal culture, but viewed with the modern sensibilities of its audience—a valid, however plain, take. Only so much stage time is given to Henry, Anne, Katherine, et al, and Henry’s appetite had larger implications than tears or even executions. Scott Jaeck’s Cardinal Wolsey, however well articulated, never finds a comfortable place in this production; nor does Andrew Long’s treasonous Buckingham. Ora Jones’ Katherine and Mike Nussbaum’s Duke of Suffolk are both capable performances, as one would expect of these impeccable actors. Jones’ first half is overtly rigid, but her dejected conclusion is rawly disturbing. Nussbaum is a clear, guiding hand in a muddled history play that sorely needs one.

There’s always merit in introducing an audience to a work they’ve never seen or read, and Chicago Shakespeare should be applauded for putting it on. But this production falls squarely in the mold of recent milquetoast Courtyard stagings that appease an appetite for Shakespeare in the same way a frozen Tombstone might satisfy an urge for pizza. It fills your belly, not your soul. (Johnny Oleksinski)