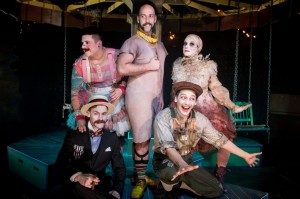 One hopes the producers and creative team of the deeply problematic “Big Fish,” which recently completed its pre-Broadway tryout here in Chicago, caught a preview of “Ivywild: The True Tall Tales of Bathhouse John,” a new play by Jay Torrence at the Chopin Theatre, before jetting back to Broadway.

You see, a core problem with the wishy-washy new musical with songs by by Andrew Lippa was that the main character’s tall tales—which give the show all of its theatricality—weren’t so tall; they were puny and mistakenly literal. As realized by Susan Stroman, giants, witches, floods and daffodils were rendered feeble and near-magic-less by the traditional musical theater razzmatazz.


Presented by The Hypocrites, “Ivywild,” a work that mangles and enchants a surreal portion of Chicago’s history, is punctuated by three ebullient, restlessly transportive amusement park rides. The first, a life-size kaleidoscope of exotic locales, whisks you away to the watery depths of the sea and sky-high into the clouds. The second is a journey playfully called the Buster Brown. Another is an unpredictable roller coaster, pulsating, curving, strobing and bumping. Halena Kays’ aerobic cast snatches up audience members, all three pre-chosen and donning a small girl’s white dress, to experience the rides onstage while another dress-clad person from the cast reads aloud a narration describing the sensory rush.

Suspension of disbelief, as we know, can be a powerful tool, but in today’s theatergoing culture, it must be coaxed and facilitated; never assumed. Kays and Torrence’s generous sequences invite the audience to experience their world in a most unexpected fashion. As the patron travels under the sea, you snicker while miniature cardboard dolphins are bounced in front of the participant’s visage and paper waves are shaken, relying on his or her gullibility to make them believe that something so meager could be so massively impressive. But through the joke you continue to wonder, “What is it I’m not seeing?” By the final trick, the roller coaster, we’ve given completely into our own childishness, so taken by this dreamland, and are as breathless as that little girl writing away in her diary. 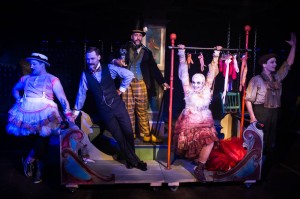 “Ivywild” is the latest Chicago history play by Torrence after “Burning Bluebeard,” a whimsical riff on the Iroquois Theatre fire last season for the Neo-Futurists also directed by Kays. That show, which I regretfully did not see, encapsulated, transformed and reframed a single concrete event, whereas “Ivywild” evokes a wide span of time. With that in mind, Torrence has approached the tales of First Ward alderman “Bathhouse John” Coughlin and precinct captain Michael “Hinky Dink” Kenna (Ryan Walters), co-founders of a fools-gold fun park in Colorado, psychologically, taking us inside the warped, dysfunctional mind of Bathhouse John during the early twentieth century.

Torrence’s play explores Chicago’s corruption in a manner few do: it acknowledges our city’s subconscious affection for those who commit political crimes. Bathhouse John is Willy Wonka-cum-Rod Blagojevich, a politician whose oddities outweigh his indiscretions, and we resent him with a smile. Torrence’s performance is a squirrel wearing a monocle; eccentric, silly, enigmatic all the while with extremely suspect motives. But we’re so endeared to his positivity and happy-go-lucky self-deprecation that his misdeeds matter little. The events of the play—dividing its time between Chicago and Colorado—are nonlinear and the characters, while based in fact, are purely theatrical beings. The park, itself, is characterized by a blood-drenched tutu-clad mute woman, dubbed The Amusement (Tien Doman), with a neck brace and what appears to be a tracheotomy. There’s a drunken elephant named Princess, portrayed by an oafish and slurring Anthony Courser, and Bath’s boyish assistant, Little Walt (Kurt Chiang).

Kays’ direction keeps this story mostly merry, with some deluges into the grim longitudes of self-wrought failure and inevitable demise. We’re first introduced to the freakish band of carnies in a solemn deliberate dance, broken up by a gyrating techno remix of “Hello” by Martin Solveig & Dragonette. Particularly wondrous is Jared Moore’s lighting design, artfully crafting a final moment, in the aftermath of a destructive blizzard, which reminds us that as adult realities, responsibilities and wrongdoings accrue, so too does our longing to return to childhood. (Johnny Oleksinski)

At The Chopin Theatre, 1543 West Division, the-hypocrites.com. Through June 16.