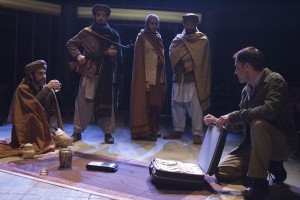 The hubbub in the men’s restroom at Lincoln Center’s Mitzi E. Newhouse Theater a couple years ago was highly energized. During intermission of J.T. Rogers’ “Blood and Gifts,” a thriller of overseas political intrigue reflecting America’s early role in present-day Middle Eastern affairs, the matinée audience was abuzz with verbal crossfire and indignation.

Some decried the play as anti-American, while others refused to embrace its representation of American arms sales to Afghan fighters in the struggle with the Soviet Union during the 1980s. Despite their misgivings over Rogers’ history, factually uncontroversial as it may be, I was tickled pink to hear a bathroom back-and-forth about the play’s content rather than its quality. “Blood and Gifts” has the piss and vinegar to provoke such fevered responses, being refreshingly aggressive during a playwriting era in which nuances have nuances.

By intermission of TimeLine Theatre Company’s Chicago premiere, the conflict and message of the play are idle. In the mold of modern historical dramas, filmed and staged, Rogers fictionalizes a little-known though massively reverberating period into a boxing match with blows of intellect and primitive masculinity masquerading as logical course of action. “Blood and Gifts” has the freight-train projection of “Frost/Nixon,” but wears dramatic license on its sleeve. While a flurry of characters take stage, each involved nation—the United States, United Kingdom, Soviet Union and Afghanistan—is essentially embodied in a single person, and their clashing is thunderous. Their arguments can be as petty as Who has the bigger office? or as essential as Lay down your arms! What makes “Blood and Gifts” such a nail-biter is Rogers’ equal treatment of skirmishes both minor and nuclear. Every scratch, kick and punch contributes to one big conflict.

Director Nick Bowling’s production is not quite messy and not quite sleek; As I said before, it is wont to idle. Rogers’ inherent propulsion is undercut by the alley staging, with audience seated on two sides, resulting in diffuse tension and generic protestations. This necessarily convoluted story needs to be viewed head-on—or head-on-ish, as its New York production was in thrust—to let us know who is in control at any given moment. At TimeLine, the thriller has a penchant for lagging, unless the scene is an even two-character confrontation, like its impeccably forceful ending. The Afghan camp scenes clip along with help from a lemming-like ensemble, and that final, lingering note sits in the hands of Kareem Bandealy, a concealed razor-blade of a performance, who knows in each and every moment who he is fighting and what he’s fighting for.

Three Chicago favorite actors with trading-card personas have been cast as James Warnock (the American), Simon Craig (the Briton) and Dmitri Gromov (the Soviet): Timothy Edward Kane, Raymond Fox and Terry Hamilton respectively. Hamilton and Fox give into the text’s often simple stereotypes. As sharp as Rogers’ plotting is, the concentration of many real people into representative figures, at times, renders his characters two-dimensional, and Hamilton in particular lends Dmitri little depth beyond a KGB-cool dialect. Kane, as the American and the man with whom we sympathize, has the level-headedness of a skilled interrogator. Such a Zen temperament, at first, gives Warnock a Praying Mantis’ shroud of looming threat, but the suspense soon fades.

The arguments between American, British and Soviet operatives stationed in the Middle East escalate little from where they start, 1981. At the end of the play, exactly a decade later, the Soviet Union has fallen, there’s a new U.S. President and the civil unrest in Afghanistan has taken on a religious, jihadist bent. Bandealy makes that shift with the utmost clarity and power, but the rest of the production is still stuck listening to A-Ha. (Johnny Oleksinski)