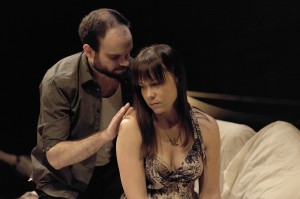 The biggest revelation of Craig Wright’s “Orange Flower Water” is that it wasn’t written in 1982. Wright, a playwright particularly relevant after the recent Broadway production of his “Grace,” directed by Dexter Bullard and starring Michael Shannon, wrote his emotionally charged evisceration of marriage, infidelity and divorce in 2002. The Chicago premiere took place in the Steppenwolf Garage in 2003.

So, when cheating husband David reads aloud a letter to his newborn child in the play’s final monologue, writing of the horrible pain his infidelity caused his children from a previous marriage, the agrarian guilt is difficult to buy into. As many of us know, the kids really will get over it. Equally brow-raising are the ensuing fisticuffs when, while house hunting with his new bride, David (Keith Neagle) discovers that all of that anguish was brought on by his own selfish lust rather than true affection for Beth (Ina Strauss), and that we mammals are all part of a vicious cycle of falling in and out of love and lust. He backtracks some, but I left Raven Theatre fully believing that sound-bite to be Wright’s thesis statement. It’s one that holds true enough for many, but the playwright arrives at his conclusions through incessant moral blame and lacerating guilt the likes of which Hawthorne criticizes, only without a visible “A.”

Interrobang Theatre Project, here in their first collaboration with BareBones Theatre Group, is attracted to plays about desperation in the middle age. Daniel MacIvor’s “Here Lies Henry” and Paula Vogel’s “Hot ‘N’ Throbbing” both dealt with the consequence of a life’s worth of accumulated choices, but both were also heavily stylized, either verbally or with ample stagecraft. Wright’s play is nine scenes of natural human interaction, and it is therefore difficult to believe that such young-looking actors, skilled though they are, could be dejectedly leaving fifteen-year marriages for greener pastures. The quartet’s performances are undoubtedly honest and as empathetic as can be achieved, but the couples’ separation is not really heart-wrenching, in part because these suburbanites look like they still have their whole lives ahead of them; that this choice wasn’t so perilous to the merciful status quo.

Director James Yost has all four actors seated on stage for the whole of the play, each couple occupying a side, but with the adulterers facing each other from across the space. While two people might be stowing away privately in bed, one of those characters seated just offstage is always hovering in their mind. Sometimes when David says “Cathy” (Cyd Blakewell) or Beth says “Brad” (Joseph Wiens), they’ll fleetingly sneak a glance at their former love. The simple device serves “Orange Flower Water” well, because the playwright seems so perturbed by the faithful partner waiting up nights back at home while their untrustworthy spouse blames them for their own indiscretions. Wright’s play says it takes two to tango, but only one to flounder. (Johnny Oleksinski)