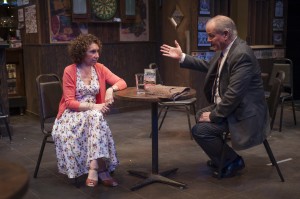 As Rhea Perlman walks into Lou’s, the kind of neighborhood bar you wind down the holidays at, a warm sensation creeps its way from your toenails to your topmost follicles. Carla is back, and everybody knows your name. But the bar in Bruce Graham’s speck of a play, “Stella and Lou,” doesn’t embrace its patrons quite like Cheers. Maybe it did once upon a bottle, but its glory days are far gone as not-for-fun watering holes like Lou’s aren’t so popular among the young. Youth versus old age is a divide Bruce Graham’s play does not want you to forget.

Stella (Perlman) is a regular at Lou’s, though not one of the boys. She’s also not really a drinker. In the first scene, as soon as Lou (Francis Guinan) goes into the back room, she pours her beer right into the garbage can, there strictly for social purposes. When he comes back, Lou assumes she chugged it, and when you consider the abrasive personality of this now-single hospital nurse, it’s not a far-out assumption. The word on the street is that the gal’s nickname is “Give-em-hell Stell.”

Their initially lighthearted talk is divided by a few eulogy interludes, but for the most part concerns where their lives are headed, the title implying that Stella and Lou are in  a star-crossed romance. Returning from visiting her daughter and granddaughter in Florida, this is a significant time for Stella as she’s considering a move to the Sunshine State. Having lost his wife two years ago, all Lou has in the world is his bar and patrons like Donny (Ed Flynn) and the recently deceased Reilly.

It’s charming, indeed, to watch Perlman and the eminently likable Guinan enjoy each other’s company, as they do so very genuinely. Director BJ Jones stages the barroom activity with peanut-shell naturalism, and Brian Sidney Bembridge’s set looks as though the linoleum floor has been mopped a thousand times to no effect. However, the play’s plot is woefully uneventful, reliant on recycled observational jokes about text messaging and wireless internet that poke fun at retirees, and a tangled ending prevents it from becoming the feel-good slice of life it sets out to be. (Johnny Oleksinski)