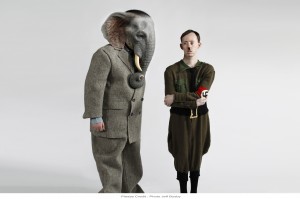 The Back to Back Theatre ensemble is no ordinary group of performers. The company has existed since 1987 to bring disabled actors to the stage in order to build, together, a performance that speaks to not only their experiences as a minority but a holistic view of what it really means to be human. Back to Back is playing at the Museum of Contemporary Art in their production, “Ganesh versus the Third Reich,” opening May 16, in which Ganesh attempts to reclaim the swastika from the Nazi party.

I spoke with Bruce Gladwin, the artistic director of Back to Back Theatre since 1991, to get a sense of the work that he does with this extraordinary group.

Prior to starting Back to Back, did you have experience working with disabled individuals?
Very little. As a child, I’d been taught to not stare or look at people with disabilities in the street as it would be considered rude. The first time I saw the company perform I was allowed access to what seemed to be a forbidden territory.

How do you cast ensemble members?
We hold a community program in our hometown called Theatre of Speed. It brings together a group of actors with intellectual disabilities who work with us once a week. The group includes the ensemble and a wider circle of actors. Often new ensemble members are introduced to the company through this program. Interestingly, most of our actors have worked with the company for quite a long time, the longest being Mark Deans, who has been with Back to Back for twenty-three years.

Can you tell me a bit about the ensemble members?
Here is a statement from the group that illustrates their individuality. More broadly I would say that they are a group of very clever, highly skilled and idiosyncratic actors who each bring to the work their own creative imaginings and complex thoughts. They are an incredible group and I feel honored to have been lucky enough to work with them.

We‘re a group of individuals, the same yet different—Nicki collects weight-loss books, Brian collects anime, Sarah collects yellow lids, Simon used to collect rubber bands, Scott collects gamer software, Mark collects cap guns. We play cops, gods, misfits. We like toys. We are part of the Geelong community, citizens of Australia. We represent our company on every single tour. We phase out sometimes. Go blank. Easily distracted. We have vivid imaginations. We work hard. We can all act. We welcome new artists. We show empowering work. We love a challenge. We open doors. We’re friends. Like family, we sometimes argue and we make up. We have high standards. We expect to be better, to achieve rock ‘n’ roll status, to change the world to create a sustainable and accessible future for people with disabilities. We’ve got a lot of love to give. Share the love.

How do you structure rehearsals?
It takes time to make a new work; each requires a new route of immersive inquiry. Our theater is not achieved through a particular technique or formula. Collectively we forge an inclusive path that allows all of the ensemble members and collaborators to travel together. Timeframe and process are considered to allow individuals to voyage with creative dignity, understanding and the opportunity for meaningful contribution.

How does the story of “Ganesh versus the Third Reich” relate to the goals or challenges of the ensemble?
The play is about power and the ease with which it can be used to undermine and abuse. The actors, like most of us in society, have had the experience of being both at the receiving end of this phenomenon and perpetrators of; after all they are human, as we all are. The narrative is set in a moral quagmire where the characters must choose to stand up against the overbearing director. I would like to think the actors placed in this situation would act as their characters do.

Finally, are there any new productions in the works you can share?
We are currently developing a new work called Laser Beak Man. Tim Sharp, an Australian visual artist with autism, developed the quirky character of Laser Beak Man, an outsider superhero with a sardonic nature. The art of Tim Sharp would have once been easily ignored, placed in a category of work created by the socially marginalized, hermits, folk makers and the institutionalized. Imbued with a freshness of imagination, Tim’s art illustrates a spark of creation that reminds us of the strangeness of our own thoughts. We will be attempting to bring this character to life on the stage for the first time. In the show, we follow the fortunes of a group of hopefuls auditioning for the role of the caped crusader himself.