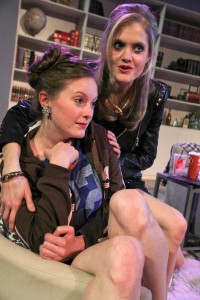 If the actors in a play ever exit the stage and invite you to leave, maybe you should. Red Tape Theatre’s “Lear” is a pseudo-sequel to Shakespeare’s “King Lear,” though audiences may struggle to find the connection. Written by renowned playwright Young Jean Lee, “Lear” often tells universal truths or at least exposes our shallow internal monologues about vanity and aging.

To be invited into the world of “Lear,” one must knock on the door of a rather traditional-looking set in which it appears some teenagers are having a party. Once the action of the play starts, the contrast between the set and the weirdness of the script is at first clever but soon digresses into confusing experimental theater. When originally presented in New York a few years ago, “Lear” was staged in a way you’d typically expect to see Shakespeare. Director James D. Palmer’s decision to produce “Lear” on a set more “American classic” than Shakespearean is interesting, but offers little insight into the odd atmosphere of this work.

The short play would seem to flow much better if the actors had a better understanding of the lines they’re speaking. That’s not to say there aren’t some strong performances here though. The feminist themes in “King Lear” are constantly being debated by scholars and Lee herself works mostly on plays with a feminist agenda. Since “Lear” primarily focuses on the daughters of Lear, it makes sense that the female ensemble carries the show. Meghan Reardon as Regan is both snide and hilarious, while many of the deeper moments of dialogue come from Amanda Drinkall as Goneril.

Each character is given their own monologue and most of them are incredibly philosophical and really do make one think about the life they’re living. However, the men’s monologues fall flat and seem to slow down the rhythm of the play. Whether it’s the fault of the playwright or the actors is somewhat unknowable without a basis for comparison. One of the more unsettling moments of the play, despite some egregiously vulgar dialogue, is when the actors turn the work lights on the audience and ask if this play is worth our time. For nearly five minutes the audience hangs in suspense and the occasional awkward giggle.

When the actors return, the play radically changes in tone and theme. The characters are no longer Shakespeare’s but instead pajama-clad children. It’s at this point that all semblance of plot, structure and story fade away and the experimental quality of the piece takes over. “Lear” struggles in many ways to be compelling theater. It seems to be stuck in its own gimmick that largely depends on an unexplained sense of animosity that is neither  justified nor deviated from. The problem with a play like this is that almost nothing happens for the entire seventy-five minute runtime and, while that may be intellectually challenging, it’s often frustrating for the theater-goer.  (John J. Accrocco)