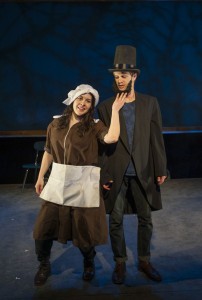 Full disclosure: I, Lisa Buscani, am the 1982 Ohio State Duet Acting Champion, a card-carrying, pin-wearing member of the National Forensic League. Hold your applause. I took it seriously, almost as seriously as the three high-school students featured in the American Theater Company’s reboot, outcasts desperate for a voice, a forum “where the adults are forced to listen.” The piece brings back great memories and makes salient points about the rough road of adolescence.

Diwata (Sadieh Rifai) is a frustrated performer desperate for a stage; continually passed over for parts in the school play, she tries to start a speech team and recruits unhappy transplant Howie (Patrick Riley), who struggles for acceptance at his new school. Both are drawn to school reporter Solomon (Will Allan), who unearths local secrets but is anxious to bury his own. The three form an alliance, support each other’s causes, and make a painful effort to communicate the things that really matter.

Stephen Karam’s script is hardy and heart-wrenching, a realistic portrayal of the grey zone of early adulthood, where every first flirts with impropriety. The ensemble has the comic chops and the ear for realistic pathos that allows them to negotiate the show’s emotional twists and turns. As a veteran speech jock, I missed some of the trademark hokey forensics conventions that are rife for parody, but Rifai’s still a giggle. Riley captures Howie’s anger and frustration; Allan’s complacency and vulnerability gave me twinge. P.J. Paparelli’s direction keeps the pacing on course, but the playing area seems dwarfed by a giant blackboard/projection screen, even as Rasean Davonte Johnson’s projection design slows the transitions down with repetition. The show may have its rough spots, but so does high school. Overall both are worthwhile experiences. And, scene. (Lisa Buscani)