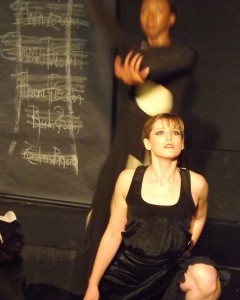 Annie Beserra and Striding Lion Performance Group present an hour-long dance theater piece inspired by the work of German expressionist performer Valeska Gert. Gert was a provocateur, a renegade and considered by many to be the first punk. I spoke with Beserra about the upcoming performance of “Dada Gert.”

Why did you choose Valeska Gert as the subject for your piece?
I first fell in love with her in grad school. I had a professor who had spent most of his career in Germany and had rare clips of Gert’s solo works. This woman absolutely exploded with expressivity; she was shocking and she was rhythmic, even though it was a silent film. She was such an incredible performative force it was almost like she was under possession. I’m a very theatrical performer and she more than anyone I’ve seen is living in both dance and theater fully. I was so moved by her I started working on a dissertation about her at Northwestern. About a quarter of the way into the process I realized that I couldn’t do the embodied research I wanted and that really this is a show, not a dissertation. I did a lot of studio and solo work; then I developed a trio. This performance is the product of years of work.

You say that you pit her “self importance against her Dada counterparts.” Could you elaborate?
She wrote four volumes of autobiography. She absolutely believed in artistic genius and believed she was an artistic genius. She appreciated and hung out with Dadaists, but one of the major tenets of Dada is that anyone can be an artist; that this isn’t precious. She felt very strongly that what she was doing was incredibly difficult, took intelligence, took craft and a unique creative perspective. That idea of creative genius was so important to her and it was what the Dadaists were rebelling against. What we do is pit this sense of fun and involvement against her solo artist identity.

And the audience chooses where they wish to situate themselves in the space during the performance.
I’m very interested in the audience determining their own perspective and being immersed in the world. It’s my way of trying to create a virtual reality on the stage. It’s not interactive in the sense that the audience will be asked to participate. They will just be inside of it.

After the years of development, how do you feel about the final piece?
I love what we’ve done; it’s incredibly joyful. I feel like it’s the beginning of continuing work. We have had the opportunity with this to perform little bits and pieces of it—at Dank Haus, at Links—for the last year and a half. It’s been so formative to the piece—doing it in different spaces, with smaller and larger audiences—it informed the work a lot. I’m grateful for that; I feel it’s a piece that the city of Chicago has birthed along with us. (Sharon Hoyer)