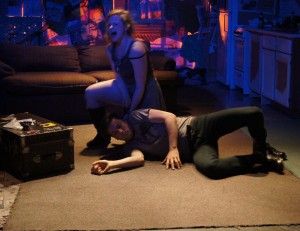 The tortured artist is a cliché for a reason. Creators have exorcised their demons through their chosen disciplines since art’s beginning. But “Reverb” playwright Leslye Headland’s script lacks the charm, humor and beauty that are an integral part of that cliché. We’ll endure the torture if the artist enthralls.

Dorian (Peter Oyloe) is an up-and-coming LA musician trying to reignite things with ex June (Mary Williamson), who wants him to reconnect with his family, including frazzled born-again sister Lydia (Brittany Burch). Unfortunately, the script fails to establish why both women try so hard to extend themselves to self-centered pout-machine Dorian, musical genius or no. The rock-music wives and girlfriends put up with the moods and self-destructive behavior because of the charm of the man and the beauty of his music, things we never get to see in Dorian. Instead, the character is reduced to a bag of angsty ticks and tricks, which is too bad; Oyloe can do much more than sulk.

Headland’s attempts to chart the pair’s descent into S&M fall flat; the execution of Ryan Bourque’s fight choreography is missing the passionate brutality of fucked-up love. The crazy logic behind the sacrifice, even with the abuse in both characters’ backgrounds, is unclear. Worse, Headland’s habit of name-checking hipster bands and rock lore feels forced. But the scenester pretentiousness works in rock blogger Ivy (Ashley Neal), who slickly fetishizes the myth as well as the music. Neal is oily good fun.

Part of what makes rock so exciting is its ability to create something new and beautiful from dangerous energy. Reverb doesn’t bring anything new to the story and it’s missing the beauty. (Lisa Buscani)