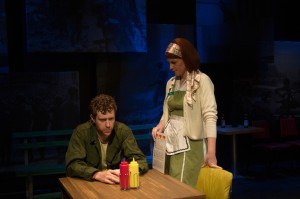 The story of the solider returning home from war is as ancient as Odysseus and as contemporary as the evening news. The specifics may vary, but the central conceit of the Greek legend is the same as William Wyler’s “The Best Years of Our Lives”: a man leaves home one person and returns home another, having undergone, for better or for worse, a transformation. And for millennia, the change was newfound honor and valor reflecting chivalrous or not-so-chivalrous bravery. Being the hometown personification of war, the solider was a hero.

Their homecoming was long heralded with marches of triumph through the streets of Rome, trumpets, sashes and topdown convertibles. But that dramatically changed with the Vietnam War, a police action whose affects at home and abroad were blurry. Its causes were ideological rather than concrete, and the soldiers’ heroism was, for some, questionable. In playwright Robert Koon’s “Homecoming 1972,” the homecoming is twofold: a soldier returns home from Vietnam and high-school alumni return home for the homecoming football game. At the game, there is to be a perfunctory musical tribute to veterans before the real show gets started—a far cry from the Times Square parades of yesteryear. Like most modern takes on Vietnam, here the hero has become the victim.

One of the best plays concerning this particular war, “The Speed of Darkness,” was actually written by another playwright with Chicago roots, Steve Tesich. It is set in 1989 South Dakota, the year of its Goodman premiere, and dramatizes the psychological defects imparted on two wartime pals who reunite nearly two decades later. I thought about this play a lot during “Homecoming 1972” on Saturday night at Chicago Dramatists. Koon’s drama is another work about a Vietnam veteran but, being a brand-new period piece, it treats the past with the foresight and consideration of the present day. Its hesitance hinders its mobility. The play, directed by Kimberly Senior, also has the ensemble plotting of television, but without the benefit and elaboration of future episodes.

“Homecoming 1972” is the living spawn of “Mad Men” in how it elongates scenes anecdotally and keeps its main events reasonably subtle. It advances very slowly. The most physically violent altercation occurs offstage, between Frankie (Matt Holzfeind), the soldier, and The Kid (Julian Hester, chasing smarminess with charisma). To be sure, the character that benefits the most from this structure is Darla, a sharp diner waitress with a sleep-deprived voice and striking red hair, given an excellent performance by Molly Glynn. The truest scene of the play sees Darla post-coitus with Frankie as she describes an eighteen-year-old daughter she’s rarely ever spoken to. Darla knows that her girl lives in the Twin Cities and prays she has the unrestrained life of Mary Tyler Moore and is not spending long hours as a waitress, going home to a crummy apartment and wading in banality—like Darla is.

Darla is the best-written character of the play, which presents a problem, because “Homecoming 1972” is most certainly not Darla’s play; it belongs to Frankie, the troubled solider in bed with her. Those forty years of distance between the audience and the Vietnam War dulls Frankie’s hurt, coming close to pacifying it. In the role, Holzfeind embodies a kind of post-traumatic stress and drinks a pocket flask of Jim Beam bone-dry time and again, but his traumas, loud and projected, fall short of the other characters’ internal strife. Frankie’s twenty-eight-year-old sister-in-law, Maria (Greta Honold), feels trapped in her hometown. Her cop husband Joe (Brett Schneider) is content with its simplicity or afraid of elsewhere’s complexity. Suburban claustrophobia is the tightest rope of this very promising musing on coming home, but its voice is drowned out by the war. (Johnny Oleksinski)