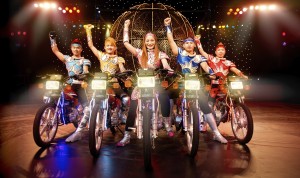 This weekend I watched “Fast & Furious 6,” alternately gaping, cheering and shaking my head in disbelief at scene after scene of various insane stunts that Dom and his team of impossibly awesome drivers effortlessly pull off. “Oh come on,” I would whisper, grinning stupidly despite myself, “that doesn’t make any sense!” Tonight at “Cirque Shanghai: Dragon’s Thunder,” as a fifth motorcyclist entered into a golden contraption referred to as the “Globe of Death,” my friend turned to me and said those exact words. And she was totally right.

But unlike “FF6,” everything that happens in this show actually happens. There’s no CGI or stunt doubles. And though “Dragon’s Thunder” doesn’t include any high-speed chases with tanks or jets (don’t get me going on FF6 again), it does include a series of constantly escalating stunts performed by a troupe of thirty-six acrobats, contortionists and general badasses. And where Vin Diesel and The Rock strut confidently through the most impossible tasks, shrugging their shoulders at the simplicity of it all, these guys and gals give an expressive flourish (a fist pump or a thumbs up) to the audience after each feat, as if to say, “Yeah, I totally can’t believe I just did that shit either!”

Still, after completing a bit, the performer will often turn around and up the ante by doing it again with the addition of a new impediment, such as a blindfold, stilts or a jump rope. I often wanted to yell, “Don’t risk it! I was already impressed!”

Throughout the show, a smattering of twinkling lights shine from a black, night-sky-like curtain at the back of the stage while stage lights shoot across the stage in solid colors (yellow, red, blue) and bass-heavy, action-movie music thumps. There’s really no sense of story or development from beginning to end; it’s just a series of incredible, crowd-pleasing acts stacked back to back for eighty-five minutes. But, as the “Fast and Furious” series has proven, who needs plot when you’ve got spectacle? Director Miao Miao Chen has organized an impressive set of acts and keeps the momentum going constantly, distracting with dancers waving silk or drummers beating out a battle march whenever the action is flagging or a set change is taking place. Still, it wouldn’t be a travesty to lose a good fifteen minutes off the running time. 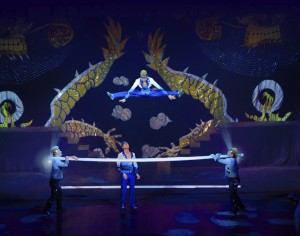 The dudes all sport different versions of the same haircut: shaved on the sides and spiked with glitter, while most of the ladies keep their hair smartly pulled back and out of the way for whoever they might be tumbling, climbing or jumping over. Clad in a wide array of brightly colored, skin-tight, shoulder-padded superhero costumes (bright red, bright yellow, bright whatever so long as it’s bright), these young performers tackle a range of impossible-seeming antics, from running and flip-diving through multiple moving hoops to balancing on the toes of a single foot while perched on the shoulder of a compatriot.

There’s a scene in “FF6” where two characters are launched dozens of feet into the air, collide with each other over a bridge and land safely (to the audience’s relief) on a car. While watching that sequence in the theater I thought, “Nonsense!” but watching the deftly maneuvering acrobats of “Dragon’s Thunder” launch each other from one swinging platform and land securely on another simultaneously swinging platform on the opposite end of the Pepsi Skyline Stage, I thought, “I bet that guy could have pulled off that bridge stunt.” Maybe he’ll be in FF7…