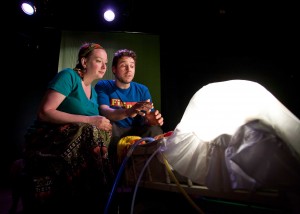 On the far wall of Rivendell Theatre is an illustrated moon cycle, starting from waxing crescent transitioning all the way to a big full moon and back again in the opposite direction. In the center, the full moon is illuminated, mimicking a glowing baby’s crib that sits atop a raised platform. If you’re seated on the side facing the moon cycle, it’s a lovely complement to the supernatural story of Stefanie Zadravec’s “Electric Baby.” If not, spend some time absorbing it before the play begins.

The image perfectly parallels the two worlds on display here: the heightened and magical existence of Natalia (Kathy Logelin) and her husband Ambimbola (Lionel Gentle)  and the downtrodden and real troubles for Helen (Meighan Gerachis) and Reed Casey (H.B. Ward) and Rozie (Amanda Powell) and Dan (Jeff Trainor). The marvel of Zadravec’s play is the way the parallel planes meet and react to one another; the way they teach each other. Just because you’re a character out of a storybook doesn’t mean that your husband can’t get hurt in a car accident or that your baby can’t get sick. But it does give you the perspective to preach love and optimism in the face of such personal tragedies.

The central characters of this ensemble piece are Reed and Helen, whose daughter recently died of an aneurism. But their horrible experiences and strained marriage are colored by the fanciful tones of Natalia, a no-nonsense Slav who begins the performance by imparting quirky wisdoms for quality sleep (a cookie and some milk) and minimizing body odor (a slice of potato in your underarm). She’s enduring her own sadness, as her infant son will depart the world too soon, but though her grief is profound, so too is her sense of self and her ability to love in the face of disaster. Textbook Midwesterners, the Caseys could learn a thing or two about that.

The clear definition of those two worlds is paramount for this play of unlikely connections to sparkle. How else can they collide? But director Tara Mallen’s production, while warm and appropriately kitschy, begins too blurry and never finds a truthful focus. There are plentiful dances, creative found scenery (set by Joanna Iwanicka) and repeated instrumental sound cues, but never any honest despair to rise out of. Our first encounter with Rozie the escort-waitress and her cohort Dan in the back of Ambimbola’s doomed taxi establishes them all as larger-than-life too soon, and their story never comes down to earth. It seems that the two heightened platforms on either side of the space, one belonging to Natalia’s apartment and the other for her husband’s hospital room, are above ground for that very reason. (Johnny Oleksinski)