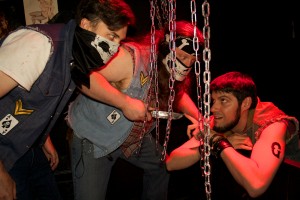 A fabulous teacher once described to me, in a harsh English screech, the probable conditions that Shakespeare was working under during the late sixteenth century. “On one side,” she said, “were the noises of bear-baiting,” a thankfully diminished sport in which a pack of vicious dogs was set on a chained-up bear in a bloody battle to the death. Jolly good fun!

“On the other, the spastic cries of prostitutes from the adjacent brothel.” Why all of this grotesque description, ma’am? She was trying to get the group to look beyond the hosiery, farthingales, glittery pomp and lutes we today associate with the hoity-toity Bard. Shakespeare’s plays were raunchy, rugged creatures, but you wouldn’t know it from the drapery and trumpets we smother them in. It’s a shame that so many modern productions, viewing the plays as cultural landmarks, keep them so gussied up, prim and proper.

In that respect, Wayward Productions’ biker-bar-set “Richard III” makes good sense. Bikers are, in the popular consciousness, brash and gross, though a sensitive Hell’s Angel is an intriguing prospect. Shakespeare’s longest history and second longest play after “Hamlet,” “Richard III” has been reduced to about ninety minutes; a boon for an environmental experience, but a defeat for a clear cohesive story. Another clever decision is the regrouping of royal houses and families into biker gangs. The crowd Richard runs with call themselves the Warlocks. But, for all its ingenuity, this “fuck”-filled production gets lost in translation, or, perhaps most of all, in transition.

Wayward first presented the site-specific “Richard III” in April at an actual bar. It was directed by Carlo Lorenzo Garcia, playing King Richard in this incarnation, and was staged at the Underground Wonder Bar. The spirit of a watering hole is absent from this too-theatrical re-creation, situated comfortably in a thrust arrangement with a few apologetic tables for those seated in the first row. A supernova of energy expels at the Den Theatre—the production’s new dwelling—in an attempt to approximate the mood of a truck-stop bar: the burly brawls, the passing out, the expletives. It’s a veritable three-ring circus of dive antics, but what comes across isn’t dramatic or scary; it’s silly and incoherent. Much of the production is spent on physical combat, which never escalates to be something really dangerous or compelling. And the tragic components of this history are unwisely suppressed.

Garcia has all of Richard’s charm, though he scarcely manipulates it to the character’s advantage. His villainy, just short of the scummy Don John’s, is extremely reserved and his unassuming affability renders him subsidiary to the pungent personalities of the other actors around him. Most memorable is Gavin Robinson who gives Tyrrell a slaw jawed yokel’s twang and unpredictability. He might pour you a cup of coffee or bite your ear off.

A handful of players fiercely embody the clenched fist of their surroundings. Maximillian Otto Lapine as Ratcliffe and Christopher Marcum as King Edward have scraggly voices and unwieldy beards, perfect for this particular world. Especially murky here though, besides the plot and text, are the women. Are they power figures, arm candy or just poor girls trapped in grayscale abusive relationships? Lady Anne, Queen Elizabeth and Queen Margaret, despite some fine performances, never find their niche in Biker Bar England. (Johnny Oleksinski)

At The Den Theatre, 1333 North Milwaukee, waywardproductions.org. Through June 29.