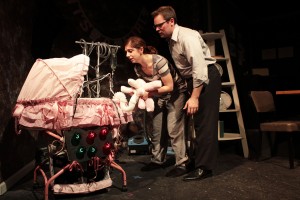 There are a couple playwright-screenwriters that are of particular interest at the moment. One is Elizabeth Meriwether, scribe of the hilarious and twisted “Heddatron” and the far less funny “Mistakes Madeline Made.” Another is Rachel Axler, a writer for “The Daily Show” and other programs, whose “Smudge” is onstage at the Athenaeum Theatre, courtesy of Ka-Tet Theatre. Axler has also written for “New Girl,” the show Meriwether created about an offbeat twentysomething teacher named Jess.

Outside of their resumes, I group them together because both write with a flagrant and often unsuccessful theatricality, but they each infuse their day-job sitcom sensibility. Onstage, the playwrights frequently focus on twentysomething and thirtysomething women going through the usual rights of passage—getting a job, marriage, childbirth—but pour sticky nuclear waste all over them. They treat these youthful anxieties weirdly with a hint of science fiction and a wallop of neuroses that can be a smudge heavy-handed.

That’s just what Axler has done with her irritating “Smudge,” a play about a woman who bears a formless, genderless child. The title refers to the nondescript shape visible on the ultrasound that its optimistic parents assume was just a glitch. Colby (Stevie Chaddock Lambert) develops an immediate, anti-maternal distaste for the helpless thing, showering insults and refusing to call it a baby. But does that first half hour of sickening abuse amount to anything substantial, insightful or cathartic? It sure tries to.

Mom has a bemusing turnaround when she, all of a sudden, gets really into the blob. The unlikely change in disposition comes right after the only moment of this play of any worth whatsoever, where the glowing baby carriage with tubules of sustenance and electricity extruding from it starts to react to classical music. The lights inside the tubes flicker in tandem with the growing song, and Colby mimes conducting using an octopus-like doll. Their dance is a sweet moment, and after that, the play becomes all about accepting their future—a roundabout way of preaching compromise.

“Smudge”‘s issues go beyond an audience’s unwillingness to accept a mother who doesn’t unconditionally love her baby. Medea wasn’t so into her kiddies either. The reservations are rooted in the character’s and the play’s own mutual narcissism and self-absorption. It’s so convinced of its own profundity that it comes off smug, yet all the while the play has little to no confidence in its ample idiosyncrasies. Some of that is also rooted in the production, itself, which is a spatial mishmash as staged by Allison Shoemaker.

Husband Nick’s office is banished far upstage, and the scenes are relegated to inconsequential white noise, making the same tired commentary on office culture that every sitcom makes. Both Axler and Ka-Tet seem to devalue the husband character. That’s not to slight Scott Allen Luke’s perfectly adequate performance, but Nick’s trouble with finding satisfaction in his adult cubicle is there only to serve as padding. Here’s an altogether different wanton thirtysomething! The whining, complaining, kvetching continue complete with mechanical, artificial shifts in outlook. There were a few technical blunders on opening night—an uncooperative IV tube, an idle projector blue screen—but none so irksome as Axler’s play itself. (Johnny Oleksinski)