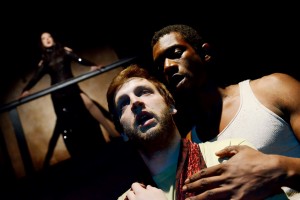 With their popular and tuneful musicals, John Kander and the late Fred Ebb fashioned a storied career essentially from derivation. That’s not to slight the duo’s awesome achievements because their order was a tall one. What they did was invoke yesteryear’s entertainments as their muse, and bathed society’s worst tragic memories in a glamorous light. The results, as you probably are aware, were both terrifying and insightful.

“Cabaret” embraced the style of 1930s Weimar cabaret to depict a Germany on the verge of social and political collapse. “Chicago” pulsed with musical vaudeville, immersing us in the crime and decadence of the Paris of the Midwest circa 1920. And “The Scottsboro Boys,” which I’ll here deem a future classic, bravely and brilliantly co-opted the style of the blackface minstrel show to tell the story of one of America’s most horrific legal injustices. These were all stories of their time told through the iconographic entertainments of their time.

But what of “Kiss of The Spider Woman,” receiving a confident if not wholly alluring revival by Bohemian Theatre Ensemble? That score is more pointedly derivative of a specific mold of composer—perhaps of the music of Adam Guettel or Michael John LaChiusa, the team’s proudly atonal contemporaries. “Spider Woman” doesn’t have much discernible style or personality to it. To be sure, there are other influences. When the titular Spider Woman sings out a spindly and foreboding warning, it’s prefaced with a B-movie motif. And, as the story takes place in a Latin American prison, there are flamenco-like flourishes too. But, unusual for Kander and Ebb, the score is not the star. With its wavering music and confounding fixation on quiet emotional sensitivity, this prison musical never finds its edge. Plus, it’s practically screaming to be a straight play.

Based on Manuel Puig’s novel “El Beso de la Mujer Araña,” two prisoners with harsh sentences share a jail cell, and eventually form an unlikely friendship. Luis Molina (Nathan Carroll) is a homosexual imprisoned for having inappropriate relations with a minor who, he says, he didn’t realize was a minor. The character, a relic of performance past, is extremely uncomfortable to watch. We’re endeared to him, or supposed to be, because of his flamboyant affectation, his sassy puns, his always-positive exterior. He’s a shoe-in for Albin from “La Cage Aux Folles” only transposed into a tragedy. It’s a weirdly antiquated stereotype that doesn’t really play anymore. The role might have worked when it was originated on Broadway by the Canadian actor Brent Carver, who is naturally enigmatic with a forceful voice and an amoebic body. Carroll’s performance, while stalwartly genial, gives into a single facet of the character, his panache, and is always tiptoeing on the periphery of honesty. His cellmate, Valentin, a revolutionary, is played by Evan Tyrone Martin with believable torment and anguish, but only so much as a musical will abide.

I’m sure that Kander and Ebb saw “Spider Woman” as a logical extension of their formidable canon. Molina finds solace in elaborate fantasies involving Aurora (Jennifer T. Grubb, like a shy Bebe Neuwirth), a brassy film starlet best known for playing the Spider Woman, a sensual grim reaper who can end your life with a kiss. So, being in a musical, these fantasies are replaced with big flashy song-and-dance numbers bragging chorus boys and glittery pizazz. Onstage at Theater Wit, though, they’re not so big and not so flashy, however the chorus is indeed terrific. Director Peter Marston Sullivan has arranged the stage in a long, unfocused runway that lacks maneuverability and any qualities of transformation. Although Linda Fortunato’s choreography is some of the best executed dance I’ve seen on a storefront stage in recent memory, the fantasies aren’t fantastical, and neither the dank world of the prison nor the swirly escapist world Molina has fabricated for himself are done proper justice. (Johnny Oleksinski)