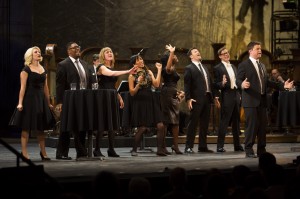 The pre-show music for Lyric Opera shows don’t typically include selections from Deltron 3030. And you can’t usually order mixed drinks with clever names like The Boozy Baritone or The Icy Maestro from the comfort of your seat (on the stage). And, most notably, it’s certainly not common practice for an usher to say, “Welcome to Second City” as you walk down the aisles of the expansive Civic Opera House to find your seat.

That’s because this isn’t a Lyric Opera show. Not exactly. It’s “The Second City Guide to the Opera,” a month-long run of an opera-themed Second City revue based on the sold-out one-night show of the same name that played the Civic Opera House in January, announcing the unlikely pairing of two very different Chicago stalwarts: the Lyric Opera of Chicago and Second City. And though this reincarnation doesn’t feature special celebrity guest artists Patrick Stewart and Renée Fleming, it’s still a unique experience.

Most notably, as previously mentioned, the audience is seated on the stage in one of three groups: plush couches and chairs near the front (“Prima Donna”), chairs gathered around tables in familiar Second City fashion in the middle (“Tenor”) and more typical audience seating in rows of chairs in the back (“Bass”). As with most shows at Second City, there are no “bad” seats, though those couches definitely look the most appealing.

This seating arrangement gives the audience a much-hyped view of the Civic Opera House house seating, gorgeously lit and rather breathtaking. Unfortunately, a giant white curtain (with a smaller black curtain behind it) hangs in the center of the stage to provide a backdrop for the show, partially or entirely (depending on your seat) blocking the view of the theater. It has the effect of creating a familiar Second City space on the impressively spacious stage. But this decision raises two questions for me: Why are we sitting on the stage facing out if we’re not meant to see the theater space? And if the point is to normalize the set back to a standard Second City backdrop, why perform on the Civic Opera House stage at all?

But this is a minor quibble. Perhaps just getting non-opera fans into the building is reason enough to perform in this space. And there’s something about the juxtaposition between the glittering chandeliers that hang over the audience and the exposed backstage walls with equipment leaning against them that perfectly captures the combination of highbrow and lowbrow that “The Second City Guide to the Opera” evokes in its roughly 105-minute running time.

The best bits here show how opera and comedy are so much more deliciously compatible than members of either audience might have guessed. Tenor Bernard Holcomb and mezzo-soprano Lauren Curnow join the six Second City cast members in lovingly sending up everything opera-related in sketches ranging from a therapist (Tim Ryder) who counsels familiar opera characters to a couple (Timothy Sniffen and Lili-Anne Brown) seeing the entirety of Wagner’s “Ring Cycle” on a first date. The entire cast is consistently funny and on-target, though not all of the bits hit.

The second act picks up the slack of the sometimes meandering first act, delivering a faster-paced, more consistently funny set of sketches, including an improvised opera based on the lives of a couple in the audience and a very clever piece that shows what our lives would be like if we all lived like we were in an opera. The second act also lets the opera singers show their comedic chops. During the improvised scene, Holcomb had the best quip of the piece, quietly declaring “Hadouken” while miming video-game play. Even the other performers stopped for a second to glance at him before continuing. And Curnow kills both vocally and comedically in both a bit where a lucky backpacker (Joey Bland) meets a charming Italian and in another where she’s seducing an unwilling co-worker.

This is perhaps the most clearly themed Second City revue I’ve ever seen, but it’s also the most PG-13. I counted the curse words on one hand, and the single F-bomb included in the finale (by Beth Melewski) almost felt like a kind of catharsis for the cast (and unrefined members of the audience such as myself). “Helen, you’ve said worse around the Mah Jongg table,” a cast member almost defensively remarks to the front row after he uses the word “shit.” That moment is funny but it feels especially resonant, as if the writers had a debate on whether or not to include the word and compromised by offering an apology for it.

But the lesson there is that opera fans are adults who use crudity in life and can handle it on stage. The writers could probably stand to take that to heart. This is an exciting collaboration, hopefully cementing an ongoing relationship between these two companies, but fans of Second City are showing up to see the edgy comedy they’ve come to expect in Old Town and fans of Lyric Opera are here to get a glimpse of the other side of town. Why hold anything back? (Zach Freeman)