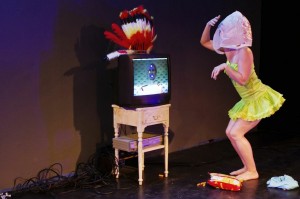 Last year’s Sketchbook, Collaboraction’s annual festival of new work, was remarkably impressive. The unexpectedly profound and profoundly enjoyable “Honeybuns” by Dean Evans emerged from that collection, earning itself widespread critical affection, a fall 2012 remount and an upcoming run at Theater On the Lake. Even the space’s memorable design was tremendously special. Stacks of colorful building blocks were situated in the room’s corners for seating and patrons lounged around, drinks in hand, casually enjoying the calamities of such an ambitious undertaking. This year, though, none of the full-length plays sparkled with the ravenous creativity of Evans’ one-man mime comedy, leaving much to be desired. Honoring Sketchbook’s origins in brevity, this year’s selection of seven-minute plays, titled “The Brown Line,” is the heartiest section of the four-part festival. The theme for its thirteenth year is “Destination,” the buzzword is “devised” and each of the groupings are named after a CTA train route: Green, Black, Brown and Blue. 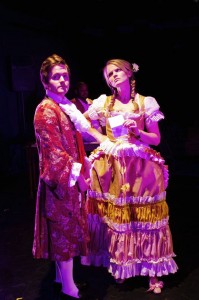 Nine seven-minute (some more, some less) plays, “9 Destinies” are found along “The Brown Line,” including a new work from the on-a-roll Q Brothers. Chicago is getting more Goethe than it is accustomed to in the form of “The Sorrows of Young Werther.” Last fall, Lyric Opera presented Massenet’s take, probably the story’s most famous version, and now the fantastic Q Brothers have adapted it in their signature hip-hop style. What’s revelatory here is that, with rhythm and rhyme, the epistolary format of the novel translates very well onstage, as directed by Kimberly Senior. Here’s hoping the brothers expand it. Other strong works include Alex Lubischer’s “Survey No. 5,” wherein a bisexual man relates his breakup experiences to the audience through stories and posed personal questions, Stanley Toledo’s “Native American Princess,” a first-person ghost story that has a boy chase after a phantom girl and “Shuffle Off,” Greg Hardigan’s touching comedy about a dying young man reliving moments in his life to the songs on an iPod Shuffle. A strangely delightful piece called “The Most Delicious Little House for Beginners (Clip Her Small To Fit The Boards)” features a garishly dressed girl watching a video of a friend’s stylized last will and testament while treading humorous experimental grounds. 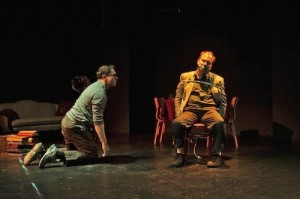 Two scripted full-lengths make up “The Black Line”: “The Long Red Road” playwright Brett C. Leonard’s “Snapshot” and Bob Glaudini’s “Deadpan Melodrama.” “Snapshot” is a subversive family play that could easily be mistaken for the love child of Charles Mee and Martin McDonagh. Under the direction of Anthony Moseley, Leonard’s play, better as it moves along, succeeds primarily as a comedy, although Ryan Patrick Dolan gives a sensitive performance as the son of a man whose tongue has been painfully excised. The more guttural traits of “Snapshot” are kept unfortunately at bay. And “Deadpan Melodrama” is just what its title implies. It’s a story of children and parents whose brutality is hollered to the rafters. The most stimulating facet of Glaudini’s play is that the audience doesn’t quite understand the lost genre for some time. The word “melodrama” initially convinces us that it’s something to be made mockery of, but the seriousness is played with admirable conviction, and the playgoers fall silent. Glaudini’s play loses its audience through its Great Plains-steady disposition, but it certainly twists the mind. 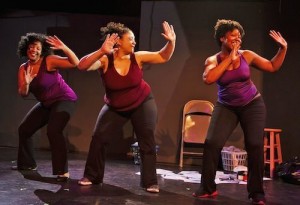 There’s just a single play to be found on the Green Line, a devised work called “Price Point” by Honeypot Performance that depicts the aftermath of our national recession, or it endeavors to anyway. The three women’s performance piece is muddled by talk-show clips and blurry data graphs that are projected to reinforce their ideas, but in actuality fray our human connection to the actresses. Besides not getting to the emotional core of their material, “Price Point” is staged with slapdash effort, and includes an overabundance of heightened theatrical devices, watering down their individual potency. The most powerful moment, however, depicts a woman attempting to pay her bills as more and more continue to rain onto her desk. 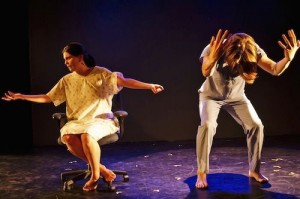 Easily the most coherent of the lengthy plays is Sarah Illiatovitch-Goldman’s “Hospital,” a devised piece which attempts to translate the terrors of waiting around and being shuffled all over a hospital using dance and monologues. Robin Toller’s doctor movement phrases are the staging’s highlight and Illiatovitch is an engaging performer, but too much energy is expelled on disarming conversations with the audience instead of building a domestic thriller. “WeatherVane” has its moments of fright as well, initially starting out with the mood of a live-in-person “American Horror Story.” However, this story of a bride with an enemy never gets specific, and its vagueness can be draining.