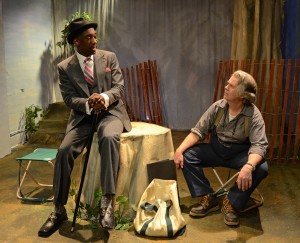 Although the writer Sherod Santos is known in literary circles for his body of poetry, his words are taking the stage in “Lives of the Pigeons,” receiving a world premiere at The Side Project. The theater is fertile ground for poets, and many playwrights will tell you they’re actually a poet at heart. Even American classicists like Tennessee Williams were more poetically than naturally driven. “For nowadays the world is lit by lightning!” Poetry and drama go hand in hand.

And then there are those instances when the lyrical dialogue amounts to mush, neither driving nor evoking anything of substance. It’s an unfortunate occurrence that mars “Lives of the Pigeons,” a humdrum most-exciting-day-in-the-life-of piece that occurs over an intermission-less seventy-five minutes. Santos’ play is little more than an ill-conceived “Waiting for Godot,” over-appreciative of its own subtleties, however unsubtle they may be.

A chessboard situated on a center stage stump is the first warning sign that these “pigeons” are going to bluntly gauge the synapses of the human mind through idle chatter about sandwiches and beer. They’re those people you don’t give a second glance on a regular day, and they’re our penny purveyors of disguised wisdom. Gus (Vincent L. Lonergan) and Max (Don Bender) spend regular long afternoons in a generic park bickering over technicalities, but this not-so-average day brings to them a visitor.

Santos often seems to be channeling absurdism (the tree and stump are recognizable “Godot” iconography), but he cannot simply recreate the Petri dish of social upheaval that formed Ionesco’s Bérenger trilogy or, well, Beckett’s canon, so the characters’ near-nonsense speech is just meager foliage. Adam Webster’s direction is mostly clean with a few lazy-long transitional blackouts, and the play’s complicating mechanism, a cane-wielding Mephistopheles in a black top hat (Matthew Lloyd) adds a certain Aldous Huxley-esque subversion and charm. But Gus’ climactic deeds are about as honestly rooted as the onstage tree. (Johnny Oleksinski)

At The Side Project, 1439 West Jarvis, thesideproject.net. Through June 30.