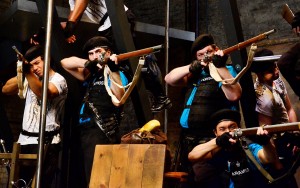 A Hawaiian shirt and a cowboy hat! That’s surely not what writer Alexandre Dumas had pictured in his mind’s eye when he penned “The Three Musketeers” in 1844. When Porthos (Christopher M. Walsh), the biggest and daftest of the storied musketeers, first takes stage, decked out in a Floridian crocodile wrangler’s best attire, it’s clear that this rowdy pack isn’t the usual trio of swashbucklers.

And the seventeenth century isn’t really missed, at first. The aesthetic of Lifeline Theatre’s production strides away from anything remotely Gascon, Parisian or really French at all except for Athos’ (Chris Hainsworth) gleefully anachronistic facial hair. It’s a grungy look, modern and desert-like, and one I’m sure that was born, at least a little bit, out of financial constraint. I’ve seen Lifeline tackle ornate period costumes before with only the most minimal of sacrifice, but “The Three Musketeers” is jam-packed with characters and locations. So, a well-defined ensemble donning different colored shirts with metallic crosses is both angsty and practical.

It’s that selfsame density, however, that evolves into this adaptation’s real arch-nemesis. There is a sharp divide between the first and second acts in Robert Kauzlaric’s overlong rendition, directed wishfully by Amanda Delheimer Dimond. I daresay it’s forty-five minutes too long. Initially the swordplay, humor and physical feats are an absolute marvel for a storefront theater, and a testament to what can be achieved with little more than stylish monkey bars (Alan Donahue designed the set) and some gung-ho actors.

There were a couple of kids in the audience on opening night, and I couldn’t help but recede back to my own childhood for a while when the uber-skilled Kyle Vincent Terry swung from pipes and spun-kicked with gobsmacking martial artistry. The sword fights, excellently staged with danger and cleverness by Matt Hawkins, are exhilarating in a way that few stage fights are, especially in a swashbuckler such as this one. But for a production that’s more about adrenaline than acting, hampered by a over-ambitious script, when the fun falls away so too does our attentiveness.

The plot is garbled tedium onstage. In order to pack Dumas’ many events in, Kauzlaric has paced the play like the fifth act of a Shakespearean tragedy—furiously rapid with a lot of stated exposition. His reverence for the story makes little sense, as the adapter is certainly not nostalgic for the dialogue. The characters speak in tongue-in-cheek colloquialisms that serve to mock the chivalrous story from the off-set. Dramatic moments are underscored by knowingly soupy piano tunes that elicit laughter during fleeting scenes of romance or gallantry, despite the hunky Glenn Stanton’s naive and likable D’Artagnan. It’s a very funny choice, but not for two-and-a-half hours.

The play never elicits sympathy in its acted moments, settling for a Miss Marple mystery-type atmosphere, and its shrieking ending is out-of-place and unearned. Kauzlaric very much wants D’Artagnan, the eventual fourth musketeer, to be the focal point of the play, but he’s only an accessory to a stringy and winding plot. The same can be said of the arguable villain, the slithy Milady de Winter (Katie McLean Hainsworth), whose deceptions are rendered much too starkly to be believed. Her conniving with the infamous Cardinal Richelieu (Sean Sinitski), behind the back of the flitting and foppish King Louis (Miguel Nunez) excites little, but it nonetheless dominates the proceedings. All for one and one for all, but nowhere near enough for Athos, Porthos, Aramis and D’Artagnan. (Johnny Oleksinski)