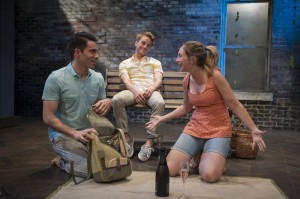 As the gay community inches toward legalized marriage in the Illinois legislature, it cannot escape the fact that no amount of social sanction will save it from the melancholia of longing. Alexi Kaye Campbell’s muscular script captures relationship circumstances set fifty years apart, and the different ways we want what we cannot (or should not) have.

In 1958, Philip (John Francisco) is married to Sylvia (Jessie Fisher) and in complete denial about his feelings for Oliver (Patrick Andrews). In 2008, Oliver is addicted to public sex, but frantic to patch up his long-term affair with Philip. In both scenarios, Sylvia is expected to pick up the pieces. Campbell’s approach to his characters’ pride is intriguing; what Philip steadfastly refuses to claim in his era, Oliver goes to great lengths to relinquish in 2008. In both timelines, Sylvia must pull back from the men she loves to maintain her dignity and sanity.

The script enables Francisco and Andrews to switch places of power and it’s effective. In 1958 Philip is so tightly wound, he involves himself in degrading aversion therapy to avoid his feelings; Francisco’s sense of restraint is appropriate and excruciating. The audience waits for an epiphany and finds none. In 2008, Oliver is overwhelmed by his freedoms; Andrews’ heady confusion is understandable but irresponsible. Both actors bring empathy to their characters’ logic, making their decisions accessible and infuriating.

While the piece’s first act is overlong and the distant, clippy pace of 1958’s dialogue can be tiresome, the point is made.  Be careful of the things that you wish for; you may forget what made them important in the first place. (Lisa Buscani)