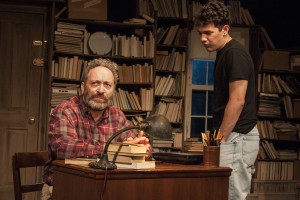 Stewing alone in his cramped, book-filled apartment in New York City, smug yet self-loathing Bob (Richard Cotovsky) has vague plans to write, think and generally just complain during the final stage of a life he has recently discovered will be cut short by the deadly AIDS he’s contracted. He declares “I don’t want to die fatuously!” even as he realizes that that may, in fact, be the only way he can go. But when his wayward nephew, the equally smug and perhaps more deeply self-loathing college dropout Josh (Rudy Galvan) appears at his doorstep uninvited, well, Bob doesn’t change his plans too much.

With minimum difficulty (and maximum debate) Josh moves into Bob’s dingy living room (lovingly crowded and grunged by set designer Andrew Hildner), ostensibly to look after him in his waning health. Over the course of the show’s 100-minute running time (with no intermission) the two men bicker, debate and even get into occasional fisticuffs. Crockery is shattered. The closest these guys come to statements of affection is when Bob quietly says, “I resent you” and Josh sympathetically replies, “It’s okay, Bob. I resent you too.”

In Austin Pendleton’s occasionally funny and frequently bleak “Uncle Bob,” that’s what passes for sentimentality. It’s like “The Odd Couple” with two Oscars and no Pigeon sisters to lighten the mood.

Both Bob and Josh are irreverent and articulate, as is Pendleton’s script, touching on themes of love, connection, death and existentialism, but while the irreverence pays off with occasional punchlines, the articulateness proves a bit of a stumbling block. Both Cotovsky and Galvan have a lot to say to each other, but not too many different ways of saying it, emotion-wise.

As Josh, Galvan maintains a sulky pout from beginning to end while Cotovsky sticks with crankily despondent. The dialogue sometimes crackles back and forth but, despite the twists of the plot, it never quite feels like they’re shocking each other (and they should be). A delicate (and subtly shifting) balance of power is implied but there are few moments where we see that the tables have unexpectedly turned on either of these guys.

Both actors have created characters that, in a twisted way, are rather endearing. But we also need to care about them. And right now that’s hard to do. Pendleton has set the stakes high (too high for his script to sustain by the end, honestly), but director Cody Estle’s pacing feels subdued. This show’s momentum lies in its rapid-fire dialogue and swiftly changing emotional landscape. And right now neither of these elements has enough power. (Zach Freeman)