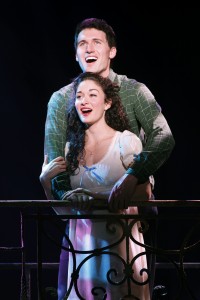 “You make the world lousy,” says Doc after a group of Jets rapes Anita, girlfriend of Bernardo, the leader of the Sharks. “That’s the way we found it,” shoots back Riff, a Jet, wiping the sweat off his brow.

If there was ever an endeavor to name the quintessential New York musical, you’d be hard-pressed to crown any other show than “West Side Story,” Arthur Laurents, Stephen Sondheim, Leonard Bernstein and Jerome Robbins’ Shakespearean love story displaced to a now unrecognizable New York City. I first saw deceased director Laurents’ (also the show’s book writer) revival, currently represented in Chicago by a teetering Non-Equity tour, in 2009.

Laurents’ production, like its tour, failed to reach the bar it set for itself. The infusion of Spanish lyrics by “In The Heights”’ composer Lin-Manuel Miranda and bolstered grunge was supposed to fire up an already impassioned show, but Laurents’ sexualized vision was far tamer than he’d been selling it. Truth be told, Gary Griffin’s Stratford Festival revival which opened that summer eclipsed the limp Broadway revival by a runner’s mile. However, while Laurents’ production was unsatisfactory by most standards, it was nonetheless a  joy to hear Bernstein’s brilliant score, still atmospherically undefeated, in Manhattan.

But at the Oriental Theatre, for the first time during “West Side Story,” I wasn’t thinking of old New York. The area that the fictional Jets and Sharks would have occupied in the 1950s was later knocked down to build Lincoln Center Plaza, and Manhattan has since eradicated the majority of its once infamous violent crime. The conflict of “West Side Story” is no longer New York’s problem. This time, during Robbins’ exquisite “Somewhere” ballet, all I could think about was Chicago: its North-South division, its young people, its police. That could be because this cast, itself, is very young, an effect that only achieves so much positive effect. The youthful fight in the characters is middling, despite the actors’ ages. Sure they’re creepily frenetic and loud, but their vigor isn’t aimed at anything specific. Nonetheless, at fifty-six years young, “West Side Story” appears to be shedding its veil of beloved Americana in favor of renewed relevance and meaning.

Although the lovers, Tony and Maria, are lent a cuter than usual infatuation by Addison Reid Coe and MaryJoanna Grisso, their attraction is subdued in David Saint’s production, recreating the Broadway staging. There’s nary a second here where the audience isn’t questioning the immaturity of their choices, never quite lost in their star-crossed love. And if there’s a void of passion, there’s also an absent menace. In the ideal “West Side Story,” the snap of Riff’s fingers can rattle a skyscraper; not necessarily for good.

All of Robbins’ iconic choreography emanates gnarl and ferocity, while still maintaining a graceful balletic ease. Young people, after all, are obsessive organizers, whether they achieve organization or not. That clean chaos reflects the grandest tragedy of “West Side Story,” which has very little to do with Tony and Maria. These kids are motivated, smart and dedicated enough to operate a tiny community, a gang, but because of minimal responsible adult intervention or positive encouragement, they throw their lives away to crime disguised as camaraderie. We never meet a single parent in the flesh.

That spirit is alive in every one of Robbins’ slashing kicks and vicious leaps, but the dance is interpreted rather robotically here, outside of the female Sharks’ lovely work in “America.” The movement is accompanied by a touring orchestra that does its best to offer Bernstein’s pounding musical cityscape, but the sound is frayed. This production is only just capable; its performances bland and its scaling-down, unfortunate. Despite all that, there’s a peeking poignancy here that just needs to be nurtured, not unlike the young Sharks and Jets. (Johnny Oleksinski)