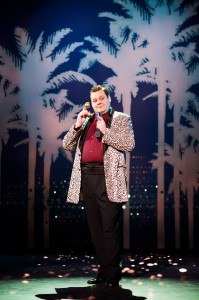 “Even if you think you don’t know Buddy Holly’s songs, you probably do,” says actor Ryan G. Dunkin reassuringly. He knows them better than most people. Dunkin plays the role of The Big Bopper (Jiles Perry Richardson, Jr.) in the twenty-fifth anniversary tour of “Buddy—The Buddy Holly Story,” which begins in Chicago this week. But beyond that, this tour is the actor’s seventh production of the popular show to date, so he’s been hearing the music of Buddy Holly, The Big Bopper, Ritchie Valens and friends near-nightly for years.

While he says “touring life can be exhausting,” Dunkin is not tired of it yet—actually quite the contrary. The Big Bopper’s enduring hit, “Chantilly Lace,” which he gets to perform in the show, “is a song everybody knows,” and he says the audience’s enthusiasm for the character and for the entire musical never diminishes from city to city.


Besides the lucky coincidence of touring to Chicago during a warm month, Dunkin is vocally excited to be playing the Cadillac Palace, where he once saw “so many shows.” Speaking with me from St. Paul, Minnesota, where the tour is situated for a brief run, Dunkin describes a unique background for an actor in a union touring musical—one that lead him from his home state of California to Chicago at the fresh-faced age of eighteen and then to New York City, where he lives today. But “Buddy,” with extremely specific character requirements, supports actors with more unusual resumes. Dunkin tells me that because of this, the show is almost like a club. At auditions for various “Buddy” productions, the actor often runs into cast members from previous stagings he’s been a part of. “Oh, hey!”

Why do I say unusual? Dunkin is not your typical University of Michigan-bred high-kicking chorus boy. A major skill stowed away in his trunk is long-form improvisation. When Dunkin moved to Chicago, the city he called home for six years, he found improv while studying at the Second City Conservatory and the now defunct Players Workshop, in addition to attending performances at ImprovOlympic. He was maturing during an explosion of local talent that included the likes of Jack McBrayer and Amy Poehler, who soon, like Dunkin, relocated to New York City. But the skills he developed over those six years still form the bedrock of what he loves to do. In New York, the actor partakes in musical improv with the People’s Improv Theater and Magnet Theater.

Does his formidable array of comedy and improv skills come up to bat in “Buddy,” a quarter-century-old jukebox musical based on real-life public figures? With the rigidity of the song-and-scene format, you wouldn’t think so, but they sometimes act as a crutch for Dunkin. For one, there’s a fair amount of audience interaction for the Big Bopper. And, as with any large show with a long run, occasional missteps happen. During those potentially freaky times, “improv helps me to not panic.”