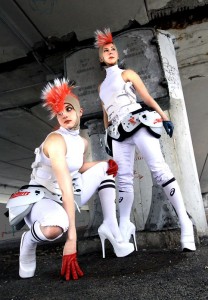 And not just sex: elation, camaraderie, play and, of course, mindlessness, frustration and blind rage. The herds explored in BONEdanse’s “bully.punk.riot.” are unquestionably aggressive ones, but the spirit fueling the mass hysteria ranges from brutal to transcendent. All pieces hit the floor hard, pounding, tumbling, stomping—this must be the most shoving ever put on stage—but a shove can mean so many things. In Melissa Ganser’s “bully” it’s coercion. Herself bullied as a child, Ganser gives a physical language to the grown-up bullying of religious institutions—brainwashing, conformity, cults of personality around charismatic leaders, persecution of those outside the flock. Dancers are grabbed by the forehead and baptized to the ground. Evangelism starts with push, not a blessing. In Megan Klein’s piece, shoving is a catalyst—or perhaps a first symptom—of the riot: uncontrolled crowd behavior and police brutality at its most fearsome. Klein is interested in the point of no return, what causes people to lose all control and succumb to their basest rage. In “riot,” the seven women in the company simulate a crowd of dozens; seething energy explodes into the flying, tumbling, bodyslam floor-dives that are BONEdanse’s calling card. Eventually the line between dance partnering and combat is crossed and the piece closes on Ganser bashing fruit with her fists till there’s nothing but pulp, juice and the smell of citrus. After the intermission clean-up, the shove becomes act of camaraderie. In Atalee Judy’s love letter to the mosh pits of 1980s New York, the shove galvanizes a community. In this rosy memory of thirteen-year-old Atalee attending punk shows on the Lower East Side, “drop your weight, elbows out” isn’t just a preparatory stance of self-preservation, it’s a sweet moment of anticipation, a yearning for human contact. The herd’s capacity to trample and crush is also its power to protect and elevate. Is there any act of trust and surrender so pure as a stage dive?

Transitional episodes between the title pieces lend levity and further reflections on conformity, competition and community formation. One standout short is a duet—performed in white platform stilettos, athletic socks, football shoulder guards worn about the hips and pink Mohawks—a really foxy coexistence of masculine and feminine aggression that is at once sexual and competitive. Judy told me the gestures in the segment came from referee hand signals. This I didn’t catch; what I did see were two human animals strutting, bucking and finally out-and-out wrestling for territory. Yang is critiqued and celebrated and the audience is expected to get feisty too. Judy said the fabric hallway through which the audience will be, well, herded to their seats is a canvas for graffiti. She plans to draw a mustache on her bio headshot to get things started. (Sharon Hoyer)