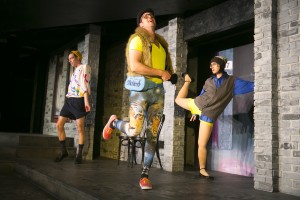 There is a sketch early on in the second act of “A Clown Car Named Desire” that starts out seeming like your standard hipster-mocking (and let’s be honest, who doesn’t enjoy a good hipster-mocking?), but then it ever-so-slowly and subtly morphs into what has to be one of the funniest sketches the e.t.c. stage has hosted in its illustrious history (“Clown Car” marks the stage’s thirty-seventh revue).

It takes place in an American Apparel, where two employees (Mike Kosinski and Brooke Breit) indifferently greet a customer (Chris Witaske) only to discover that he also works at American Apparel. The trio then begin an epic marathon of idle one-upmanship and “top that,” while languidly pacing the stage, attempting to look unimpressed with each other and using as little energy as possible to speak (Breit declares her hate for a four-legged adversary in one breath: “ifuckenhatethatgoat”). At one point Witaske, sporting a fanny pack and colorful tights, declares “I’m exactly where I want to be for a thirty-five-year old man.” And we believe it. Both for Witaske and for his character.

And the scene goes on and on and on. In fact, it’s probably half of the second act. I’m sure it’s the longest scene I’ve seen on any Second City stage. And it could have been longer. Because it’s that funny. The rest of the show is funny too. In fact, it’s more than funny. It’s hilarious. Consistently, uproariously hilarious.

The male half of the cast (Kosinski, Witaske and Michael Lehrer) are all returning from The Second City e.t.c.’s well-received thirty-sixth revue “We’re All in This Room Together” while the three female cast members (Breit, Carisa Barreca and Punam Patel) are making their e.t.c debuts. Director Ryan Bernier also returns, pulling both comedic and almost-emotional performances from his impressive cast. 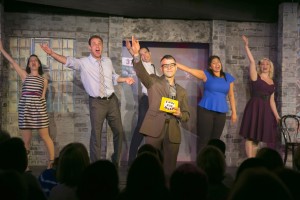 Really, there’s an inherent sense of sweetness and heart deeply embedded in every sketch. A bro-tastic older brother awkwardly bonds with his younger brother’s (male) prom date. A pair of old friends address unrequited emotions on the basketball court. Even the three hipsters from the American Apparel sketch eventually break down and admit to each other that it’s exhausting trying so hard to make it look like you’re not trying very hard. In short, while every scene involves broad characters, they’re not two-dimensional. These outlandish characters also have souls and feelings. And all of these comedians know how to unsentimentally instill them with both. And that makes for better comedy.

The theme here seems to be the dividing line between dreams and reality; how we see ourselves (and the world) versus how we really are (and it is). How maybe the real world is crazier than we imagine. And how maybe if we believe enough in the fantasy world we want to create it will become reality. At least I think that’s the theme. It’s a little murky. The only truly consistent theme I picked up on was poking fun at discount grocery chain ALDI.

Still, this collection of sketches is solid enough to work with such a loose theme, delivering constant laughs and effortlessly maintaining its momentum. The two-hour running time (including an intermission) feels much shorter. There’s singing, dancing, improv, audience participation and plenty of truly solid good ol’ sketch comedy. But, most importantly, there’s the fun of watching a cast that clearly enjoys working with both the material and each other. And making fun of hipsters. (Zach Freeman)